Student hopes UofSC can 'Be the Match' 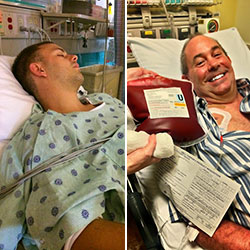 This summer junior Eric Villeneuve donated 1.5 liters of bone marrow to his father who was diagnosed with cancer. Now Villeneuve wants more students to register to be a match.

Eric Villeneuve got one of the most important phone calls of his life this past summer while training at West Point. He was a match. Without a second thought, Villeneuve quickly returned home to donate bone marrow to his father.

Now Villeneuve, a junior criminal justice major, is hoping to get more University of South Carolina students, faculty and staff members registered with the national Be The Match bone marrow registry. It’s a cause that’s important to him personally, having seen what a difference bone marrow donations can make.

The Maryland native learned that his father had cancer his freshman year at Carolina. When chemotherapy didn’t work and the cancer progressed, Villeneuve’s family turned to a marrow transplant.

Before returning to campus for his junior year, Villeneuve donated 1.5 liters of marrow to his dad. The physical pain of donating meant three days of discomfort, he says, but it was for a much bigger reward. His dad is doing great these days, he says.

“I would do it for anybody. You’re saving somebody’s life,” he says. “It’s a little pain to give somebody a shot at living.”

This semester Villeneuve and a group of students started UofSC’s own student chapter of Be the Match. It all began last year when the students organized a drive on campus and registered more than 400 possible donors in about four hours.

“It’s kind of a pay-it-forward kind of thing,” says Villeneuve. “Of the 400 people who signed up, chances are it’s not going to be a match for my dad, but that’s 400 people on the registry who might be a match for somebody else.”

The group plans to organize swab drives several times a year and work with other organizations on campus and around town.

“It’s a great organization because it helps save lives, and that’s the best way to put it,” he says. “There are so many patients out there who need these transplants. For some people it’s their only shot at getting rid of the cancer.”

Villeneuve says he plans to remain involved with the group until he graduates.

“Before my dad, I would have never thought about this. And I think a lot of people are in the same situation as myself,” he says. “If they don’t have it personally affecting them, they don’t think about it. But when this stuff happens, you realize ‘I can do something to help.’”

Villeneuve says students can get involved with the group and help plan future events. Others in the community can work with the group to host events as well. For more information, find the group on Facebook and check out the Be the Match website.