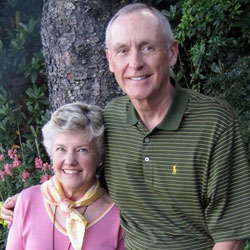 Giving back for many years to come

U.S. Navy veteran Fred Tollison, '64 engineering, and his wife, Sarah Belle, have established and endowed a scholarship for NROTC and active-duty military students majoring in engineering.

Fred Tollison graduated from the University of South Carolina 50 years ago, and he has been a proud Gamecock ever since. But there was one moment when the prospect of attending Carolina was an occasion for joy — and dismay.

“I was about one month away from starting at Clemson when my dad walked into the barbershop where I was getting a haircut and handed me a letter,” said Tollison, a native of Marion, S.C. “It was from the U.S. Navy informing me that I’d received an NROTC scholarship — at Carolina.”

Tollison’s dad was a Clemson grad, and the Tollisons had often attended football games in Tiger Town.

“My heart dropped when I first read the letter, but the scholarship was too good to pass up. I never looked back, and attending Carolina changed the arc of my life,” he says. “Things worked out wonderfully from the moment I arrived on campus.”

Tollison earned a chemical engineering degree in 1964 and spent the next six years on active duty in nuclear-powered submarines. That led to 20 years in the U.S Naval Reserve and a long and successful career in the nuclear utility industry.

In honor of his accomplishments, Tollison will be named admiral of the year at the NROTC's Pass and Review ceremony Thursday (Oct. 16) on the Horseshoe. The honorary title is awarded to an NROTC alumnus by the university's NROTC Alumni Association every year. Though it has been 50 years since he graduated, Tollison's support for his alma mater is stronger than ever.

“My wife, Sarah Belle, and I decided to put to good use some money we had received from a deferred compensation by creating endowed scholarship funds at Carolina and at her alma mater, Converse College,” he said. “Our hope is that we might encourage other alumni to do a similar thing.”

At Carolina the Tollisons established the Fred and Sarah Belle Tollison Engineering Endowed Scholarship Fund, which will provide scholarships to selected NROTC students and active-duty enlisted students who are majoring in mechanical, chemical or electrical engineering. Second preference will go to honorably discharged veterans or their dependents.

“Along with my NROTC scholarship, I also received an engineering scholarship from Carolina, which helped me immensely,” Tollison said. “We’re glad to give back in a way that will help students for many, many years to come.”

Visit Carolina's Promise to learn how you can support the College of Engineering and Computing  or other academic units at Carolina.