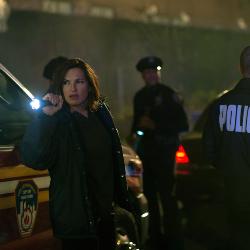 This semester a women's and gender studies class is delving into serious issues through the popular television show "Law & Order: Special Victims Unit."

Grace Gardner considers herself an “SVU junkie,” one of the many people who binge watch rerun marathons of the popular television show “Law & Order: Special Victims Unit,” spending nights cuddled up with Detectives Stabler and Benson on Netflix.

Fortunately, Annie Boiter-Jolley, a doctoral student instructor and a fan of the show, wanted to bring Benson and Stabler to campus. This semester Boiter-Jolley launched a class all about the popular show and how it addresses women and gender issues.

“I got into watching SVU and became – I don’t want to say obsessed – but really into it a couple of years ago.  When I watched reruns as I was prepping for another women’s and gender studies class, I knew exactly what piece I would assign to go with an episode,” says Boiter-Jolley.

Starting a class all about the show was a chance to expose more students to women’s and gender studies, she says.

“I was hoping that students who were already fans of the ‘SVU’ and who had never taken a women’s and gender studies class would sign up and then realize how much more there is to it and be exposed to gender studies scholarship that they might not have been otherwise,” she says.

Students in the class watch the episodes together and talk about the show in relation to various readings and the issues each episode tackles. Boiter-Jolley keeps the format open, letting the students open up and talk about the issues, like rape, domestic violence and gay rights.

“It’s very discussion based. Instead of just listening to someone talk, we’re able to be involved in the discussion and we hear other people’s opinions and stories,” says Madison Bourne, a fifth-year women’s studies senior. “In this class, you need to hear these girls’ opinions. There are girls in sororities and girls in sports and they are all so different. Having all these girls with different opinions, it’s really important to hear everyone’s view on it and make your own critical argument.”

It’s not just about watching the show. Students will have to prepare an activism project for the end of the semester and each meeting is based around news articles or scholarly journals.

“In addition to not just watching television, it’s really important to me that we’re critical of the show itself,” Boiter-Jolley says. “I hope they will take away from it the desire and inclination to approach other television shows and pop culture with the same kind of criticism and the same kind of questions. I hope it makes them more inquisitive and more thoughtfully engaged with television and all kinds of media.”

And the students love the class so far. The class is the perfect fit for college students who don’t want to sit in another lecture-style course, says Gardner, a junior international studies and women’s and gender studies double major.

“I don’t learn well in lecture-only classes and this class is a really unique opportunity to get out of a class like that,” she says. “And of course, there was the huge appeal of getting to watch one of my favorite TV shows and get class credit for it. That’s an opportunity I just couldn’t pass up.”

Boiter-Jolley says the students have been the most engaged group she has taught.

“In some classes, you’ll have the four or five people who are always talking. In this class, there’s a lot more people talking,” she says. “And they don’t always agree with each other and it seems like they feel comfortable enough to voice those disagreements.”

Students say the class has changed the way they watch the show and other things in popular culture.

“I can’t watch anything on TV now without criticizing it,” says Bourne. “The new season just started and I didn’t watch it. I feel like if I watch it, I’m going to be so analytical of it.”

Since the course is in its first semester, Boiter-Jolley hopes to teach the class again and she’s already taking notes on the new season in preparation.

Want to watch on your own? Here are a few of Boiter-Jolley’s favorite episodes and reading to get you started:

“Persona,” season 8; with reading “Till Death Do Us Part”

“Legitimate Rape,” season 14; with reading “The Legitimate Children of Rape”