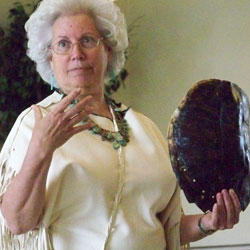 Beckee Garris, a student and the visitors' coordinator at the University of South Carolina Lancaster's Native American Studies Center, holds up a turtle shell during a talk about life on the Catawba Reservation near Rock Hill, S.C.

Beckee Garris calls herself a “late bloomer,” though the 67-year-old University of South Carolina Lancaster student laughs when she says it.

Garris may not have started college until her children were grown, but as a vocal member of South Carolina’s Catawba Indian Nation, having grown up on the tribe’s reservation near Rock Hill, S.C., she has a wealth of experience and cultural knowledge about the native community.

As the great-granddaughter of chief Samuel Taylor Blue, who is widely regarded as the last native speaker of the Catawba language, Garris picked up many Catawba traditions growing up, including the ancient art of Catawba pottery, which she practices and demonstrates to this day. And as someone who left the reservation in 1966, at the age of 19, then came back 30 years later following a divorce, she has a valuable perspective on the tribe’s modern history.

But much of the tribal heritage simply wasn’t passed on, she says. The Catawba Nation, which spanned roughly 144,000 acres in 1763, had been reduced to a reservation of just 1,300 acres by the 1950s, when Garris was a child. By that time, she says, many of the native traditions were fading.

“I knew I was Catawba growing up, but that’s about all I knew. We were a generation of children who were seen and not heard. You may have heard adult conversations, but you weren’t allowed to make noise or pipe in with a question.”

For the past few years, though, Garris has been asking questions as a student at the university’s regional campus in Lancaster, where she has benefited from an emerging scholarly interest in the state’s Native American traditions and the work of faculty such as linguistics instructor Claudia Heinemann-Priest, whose project to transliterate the oral Catawba language has already had an impact.

“Claudia helped us revive the Catawba language and helped us to develop an alphabet, to be able to start actually having a written language,” Garris says. “That allowed us to teach some of the Head Start kids on the reservation some of the basics of the language, like colors and animals and simple phrases.”

As the visitors’ coordinator at the Lancaster campus’s Native American Studies Center, where she has been an employee since 2012, Garris is now answering questions as well — and not only for members of the outside community who have an interest in the Catawba culture. She’s answering them for herself, for her children and for their children.

“Even though I grew up Catawba, I didn’t know how special that was until I had children of my own,” says the mother of three and grandmother of six, all of whom self-identify as Catawba. “I wanted them to know their heritage and where they came from.”

Beckee Garris will give the talk "Growing up a Reservation Kid" at noon, Friday (Nov. 21) at the University of South Carolina Lancaster's Native American Studies Center.