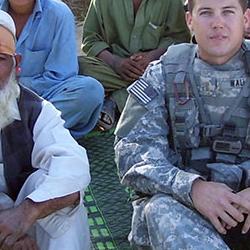 Third-year law student and U.S. Army veteran John Wall has seen firsthand the need for rule of law in countries devastated by war.

John Wall knows all too well what happens when a country descends into chaos with no faith in established laws to keep citizens safe.

A third-year law student at the University of South Carolina, Wall is a former U.S. Army captain and West Point graduate who spent five combat deployments between 2007 and 2012 in Iraq and in Afghanistan. His mission? To help establish the rule of law in places where it had never been. In Afghanistan, Wall worked with local governments in Helmand Province to help local elders establish a police force after ousting the Taliban.

“We needed to set up a meaningful local government among diverse groups and interests to make sure that all of the work we had just done did not disappear with a vacuum of power that would allow the Taliban to return,” Wall says.

The Rule of Law Collaborative at University of South Carolina was created in 2010 to take on just such issues.

“Building rule of law is not just about creating laws and legal institutions,” says Joel Samuels, newly appointed director of the collaborative and a professor of international law. “It involves educating citizens, ensuring access to justice as well as to food and potable water, guaranteeing rights for women and children, strengthening public health and reducing corruption. It touches on every aspect of life. Without rule of law – democratic or not – states are bound to fail.”

Samuels says the key to building rule of law in a fragile and post-conflict state is to focus on long-term development and not short-term outcomes.

To that end, the collaborative will help U.S. government officials provide rule of law support in fragile and post-conflict states under a $5 million grant from the U.S. State Department.

“This grant positions the Rule of Law Collaborative as the premier research and training center in the country for interagency cooperation on the rule of law,” Samuels says. “We have a proven track record in this area. Over the next five years, we hope to work with more than 1,000 mid- and senior-level officials from the State Department, Department of Defense, Department of Justice, U.S. Agency for International Development and other major governmental agencies.”

For the past four years, the collaborative has developed and conducted programs tailored to U.S. government agencies, nonprofits and corporations and the academic community around the world. The collaborative also has supported academic research that explores questions of relevance to policymakers.

One researcher is Payal Shah, an assistant professor in Carolina’s College of Education.

In her research and her training, Shah focuses not on the building of schools, but the curriculum of those schools and what they are teaching the girls.

“I take a rights-based approach,” Shah says. “I look at ways an education can – and cannot – contribute to gender equality.”

As an example, Shah says, the U.S. has a policy of building schools in war-torn or other areas attempting to rebuild under the rule of law. But that policy says nothing about the curriculum. “We have this belief that education is transformative,” Shah says. “But there is a huge body of literature that schools are reproductive, they are there to reinforce the existing societal norms.”

If the newly established schools are not teaching girls to challenge the status quo and that they have rights, they may just be reinforcing the notion that women are second-class citizens.

“We call that the hidden curriculum,” Shah says. “We are complicating this notion that schools are inherently good places.”