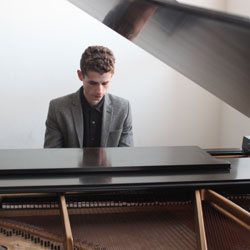 Music major Lonnie Russell plans to study medicine at the University of South Carolina School of Medicine Greenville after graduating from Carolina in 2015, but he can't imagine a time when he'd ever give up the piano.

Inspired by his family doctor growing up, Lonnie Russell wants to help people, simple as that, and will take the first step towards realizing that goal next fall when he enters the University of South Carolina School of Medicine Greenville.

First, though, the Carolina senior needs to find a piano.

Russell, who graduates in the spring, is a music performance major. He has been playing piano since the age of 7, entered the S.C. Governor’s School for the Arts and Humanities at age 14 and followed his passion for classical music to the university after meeting piano professor Charles Fugo, whom he describes as “the perfect person to study with.”

But while music is essential to Russell’s happiness — “I think I would lose my mind if it wasn’t in my life,” he says, explaining that he needs to track down an upright piano before he makes the move to Greenville — playing Chopin and Bach as a career just isn’t enough for him.

“It’s fulfilling to me personally, but it doesn’t fulfill everything I want to do with my life,” he says. “I realized before I even came to USC that I really want to be involved with people, to help them one-on-one, in a very basic sort of way. You get to interact with people in music, and it really does affect the lives of people, but there’s a distance.”

That “distance” will vanish quickly come fall, when Russell begins training with an ambulance crew through the Greenville School of Medicine’s innovative EMT training program for first-year students. Rather than sit at a piano and receive private lessons, he will be immersed in the high stakes drama of real-life medical emergencies.

And that’s fine with Russell. In fact, the EMT program is one of the key factors that led him to choose Greenville over other medical schools.

“I think that’s a pretty amazing opportunity, to get to see patients really right from the beginning instead of waiting until year three, which is typically when you have that opportunity,” he says. “There’s really no limit to the kinds of things I can experience in that type of situation.”

Russell has been preparing himself for the rigors ahead since he first arrived in Columbia as a freshman, loading up on science courses between piano lessons and practice. He plans to graduate in May with a bachelor’s degree in music and two minors, one in chemistry, the other in biology.

“There have been times when it has been very difficult,” he says. “There are just so many things that have to get done by the end of the week, and there’s just a ton of information. That may be the most important skill that I’ve tried to develop at USC.”

That and his music, of course, which he envisions as a sort of counterpoint to his studies and eventual career.

“It’s so much a part of what I do and who I am at this point that I think if I stopped playing, something would have to take its place,” he says, “and I don’t think anything could really do that.”