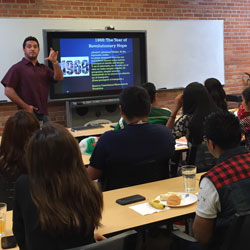 Immigration policy is one of the stickiest political issues of our time. But for University of South Carolina assistant professor of Mexican literature Raul Diego Rivera Hernandez, who was born in Mexico and went to college in Mexico before coming to the U.S. to pursue his Ph.D. at Ohio State University, education is a basic human right.

That’s why, back in August, Hernandez volunteered with Freedom University. Started in 2011 by a group of University of Georgia professors, Freedom University provides free college-level courses for undocumented youth in Georgia who have been denied entry at the state’s top five public universities and denied in-state tuition at all public state universities by the Georgia Board of Regents.

The school’s name is inspired by the Southern Freedom Schools of the 1960s, which offered classes on social justice to African-Americans during the civil rights movement.

“Freedom University is a place where students can continue to develop their skills, attend classes and receive a high-quality college education but without receiving credit,” says Hernandez, who first learned about the program in 2013 when a group of the small school’s students and volunteers were invited by Carolina’s Latin American Studies Program to give a talk on campus.

“We were celebrating the 50th anniversary of desegregation at the university, and we wanted to show that there are still issues — in this case, where undocumented students in the state of Georgia could not attend school with in-state tuition rates,” says Hernandez.

After speaking to several students, Hernandez offered to come to Georgia as a guest speaker. The director of Freedom University told him they would be happy to have him but what they really needed was someone to come teach and mentor.

“For me, it was a mandatory issue to really do something. I found out that I could have at least some small impact, at least with this small class that I teach every Sunday.”

Hernandez, who teaches Latin American crime fiction at Carolina, now drives to Atlanta each weekend to teach contemporary Mexican history and politics. His research interest in Mexican “narco-literatura” and grassroots journalism inspired by the recent drug war provides a context for discussing the ongoing violence in Mexico with students who may have been born there but have little knowledge of their birth nation’s recent history.

"They are building their own personal history, their own personal memory, and connecting to things they have heard about but never really experienced," says Hernandez. "My goal is to help them understand what has been happening in their country for the last 15 years that they have been absent."