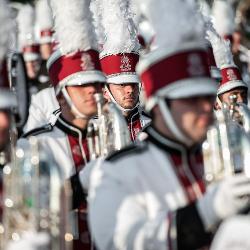 Alumnus Sean Rayford has been snapping photos at Gamecock football games for his first photography book. Here are a few of his photos from "Great to be a Gamecock."

Sean Rayford’s camera is his passport to worlds he might not otherwise visit: from cheerleading championships to punk rock concerts, from the sidelines at NFL games to the aisles of the wedding chapel.

While Rayford started photography as a way to get into rock ‘n’ roll concerts for free, it has become a lifelong passion and career – one that he honed as a University of South Carolina student.

“It’s how I understand the world,” he says. “It allows me to hang out with punk rock kids who destroy their living room and have ridiculous parties or house shows and at the same time go to an NFL football game and see all sorts of things.”

Rayford’s photo interests are widespread. Photos of cheerleader championships are posted on his blog after shots of local protests and the annual Tigerburn. He has photographed politicians, including the presidential primaries in South Carolina, and advertisement work for the city’s tourism department. He still regularly takes his camera to local music venues or other events around town.

He got started at Carolina shooting for the student newspaper, The Gamecock. Rayford, a media arts graduate, enjoyed photojournalism because it allowed him to build his portfolio and practice his craft.

“The camera is a passport into situations that otherwise you would never be in,” he says. “I’m not going to hang out backstage of high school cheerleader championships but it’s interesting.”

Lately he has been drawing on that experience as inspiration for his newest project, a book of photos from South Carolina tailgates.

“In school, I shot all the games and freelanced NFL games. I was never shooting at a tailgate though,” he says.

Rayford was inspired by famous street photographers in New York City who spend their free time taking pictures of everyday life in the city. The only time he has access to so many people are football games at Williams-Brice Stadium. One Saturday, he just rode his bike to the State Fairgrounds, where many fans park and enjoy pregame festivities, and started shooting.

“I got a few things that I really liked. And I realized, this happens six or seven times a year,” he says. This year, those shots filled Rayford’s first book, “Great to be a Gamecock.”

While he works on a follow-up book — pictures from tailgates at that Upstate university — Rayford can be seen around Columbia snapping photos of just about everything as he continues pursuing his passion and making a career with his camera.

See more of Rayford’s work on his blog and his Facebook page. His book is available online and at Sid & Nancy in Five Points.