Capstone adventures to Peru for Maymester 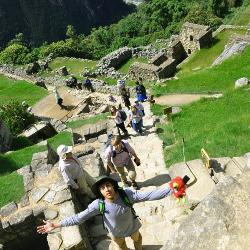 Erin Wilson, assistant principal of the Capstone Program, was driving on Blossom Street when Patrick Hickey, the faculty principal, called her.

It was the day before Wilson started working for Capstone and she was now volunteered to escort a group of Capstone scholars to Peru for Maymester. What happened after that was an eight-month journey of paperwork and visas and more paperwork until touchdown in Lima, Peru.

The 13 scholars spent 15 nights in Peru, split between Lima, Cusco and Machu Picchu, where they explored the cities' historical and modern districts.

"I'm standing on this bridge and I look to my left and there is a sacrificial site; I look to my right and there are skyscrapers and modern Lima," Wilson says. "It was a crazy. How do I have ancient artifacts just chilling out in the open and then a city of 10 million people all around?"

The scholars traveled through Peru to Cusco, where they volunteered with a children's home, planting flowers, painting fences and playing soccer with the kids.
After Cusco, they trekked up the Andes Mountains to Machu Picchu.

"I captured over 900 photos at this place alone, but not one of them adequately displays these ruins," second-year Capstone scholar Nicole Robideau says.

Wilson and Robideau say the sites there were "breathtaking" in more than one sense of the word. The group had to ride a bus and a train to the base of the Andes and another bus up the steep incline.

"There are buses going up all the time taking tourists up there. Buses go up and they have to come down. We'd get around the corner and come face-to-face with another bus and one of us would have to back up," Wilson says. "I am not a fan of backing up on a switchback."

After touring the ruins and spending two nights in the ancient city, the group went back to Cusco then flew to Lima and back to the U.S.

While Wilson had fun on the trip, it did come with its struggles, chief among them was a language barrier. Wilson, along with half of the students, doesn't speak Spanish.

"We stuck close to the kids that did speak Spanish," she says. "There was a lot of smiling and nodding and gesticulating. It was a lot of pointing. Someone eventually downloaded an app where you took a picture of a word and it would translate it."

Adjusting to the culture was another obstacle to tackle, especially at restaurants.

"If you left the menu open, they would presume you haven't decided," Wilson says. "So it took us some time to realize we needed to shut our dang menus so they can come over. We waited 40 minutes to order our drinks once because we were talking."

Overall, Wilson had a great time on the trip. The group got to ride horseback in the Andes Mountains, explore ancient ruins, go cave exploring and visit modern, foreign cities. Her favorite part, however, was exploring the Moon Temple. The temple is a small cave near Machu Picchu where the moon shines through and where the native people meditate.

"It was close to sunset and you could smell the incense in the air," Wilson says. "You knew there was something different about that place, something sacred."

She says she plans to go back to Peru sometime in the future and hike the Incan Trail, a four-day hiking journey that ends in Machu Picchu.

"I definitely am going to go back without students so I can enjoy myself a little bit more," Wilson says. "Just have to save my soles."