Carolina rugby on the rise 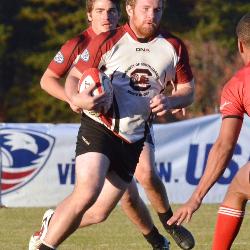 Headfirst into the game

Carolina rugby players leave it all on the field.

If you don't, you're not alone. The rough-and-tumble sport can seem a bit baffling for first-time spectators, who may recognize certain similarities to American football but don't know what a scrum is or why some matches feature seven players on each side and last a mere 14 minutes while others feature 15 and last 80.

But bafflement could give way to greater fan interest once rugby is reintroduced as an Olympic sport in 2016, after a 92-year absence from the summer games. And if the University of South Carolina Men's Rugby team has any say in it, fan interest will also grow on the Carolina campus even sooner.

"Compared to other regions of the nation, rugby in the South is a little bit further behind in terms of the number of teams and our youth development," says alumnus and current team manager Jim Farrar ('10 business administration; '12 master's, human resources). "But even though we're behind, we have a number of teams that compete at a very high level, especially in the Southeastern Collegiate Conference and the ACC teams."

In fact, South Carolina claimed the Southeastern Collegiate Conference 15-a-side rugby title in April, topping unbeaten Louisiana State University 41-25, then cleaned up in annual conference awards, with head coach Mark Morris winning coach of the year for the second-straight season and senior center Matthew Berenato taking home player of the year honors. But more than titles and accolades, the team is on a mission to promote the sport, which has been played as a club sport at Carolina since 1967.

"It's a little bit more free-flowing than football," says scrum-half Luke Bolembach, one of four current players who came to Carolina from Pennsylvania's Downington High School Rugby Football Club, a perennial youth rugby powerhouse. "When I started playing, it reminded me of playing backyard football with my friends, just sport in its purest form."

Indeed, one of the first things new spectators notice is that while the game is extremely physical, players don't wear pads. Also, play doesn't stop just because the guy with the ball gets tackled.

"That's one of the things that makes rugby free-flowing," says Bolembach. "When someone's tackled and goes down, players contest for the ball by trying to push the other team's players off the player on the ground. That's called 'rucking.' "

Another big appeal of the sport is the level of camaraderie it encourages, not only among teammates.

"You leave everything on the field and then afterwards have a meal, talk, socialize with the other team," says Farrar, who played high school rugby in Sumter before becoming involved with the administrative side of the sport as undergraduate. "You don't really experience that with other sports. There's a brotherhood within the team but also within the sport."

"By 10th grade, I realized that I liked rugby more than I liked football," Bolembach says. "But what's kept me involved in the game is the camaraderie and the brotherhood that rugby fosters. I'm sure that football players and other athletes have that, too, but the bonding that I have experienced through rugby has just been stronger than what I've experienced in other sports. I think it's one of the best sports in the world."

The University of South Carolina Men's Rugby team is at this weekend's seven-a-side Collegiate Rugby Championship in Philadelphia, which will be broadcast on the NBC Sports Network May 31 and June 1.