From rags to runway-worthy clothes 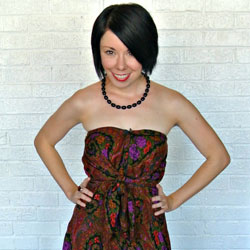 With a little sewing and chopping, the Refashionista was able to rehab a formerly ugly dress.

Artistic minds have an inherent need to create and think in unusual ways, a luxury that real life doesn't always afford. Thanks to the ability for people with ideas to self-publish their thoughts and activities on the Internet, where they can be accessed 24/7 by nearly everyone, fantastic opportunities can arise, as in the case of newly famous fashionista Jillian Owens.

Just four short years ago, Owens began "refashioning" clothes, that is, making over ugly, oversized or nearly trashable thrift-store finds into something worthy of a compliment. It came out of wanting to dress well without breaking the bank.

After getting tired of explaining what she was doing over and over again to people, Owens decided to blog her creative journey so she could just direct people there to get a better sense of what she was doing, how and most importantly, why. She wants to change the way people think about fashion, particularly fast-fashion, which is made to fall apart quickly and sometimes comes from shops with questionable labor practices.

Her work has been noticed. She has appeared on "Good Morning America," BuzzFeed and other websites. "I didn't think anyone outside of Columbia would care what I was doing. It was a big surprise for me," she says.

Before starting the blog, she was in a creative funk, she says, but evidenced by her 700+ refashioned creations, her creativity flows best at her sewing machine. It serves as an outlet for her, contrasting to the work she does at her day job as a program assistant at the United Way. "I value what I'm doing, but there are very few opportunities to crunch numbers creatively," she jokes.

As theater major at the University of South Carolina, Owens never aspired to become a writer, or even a "sewist," as she calls herself. However, she does have roots in thrifting from her childhood in Kentucky. "When I was a little kid I grew up going to rag pulls with my family. A giant truck of stuff came to us, and we would get our neighbors and friends to come over for an evening and get what they want from it," she says. "I have no idea where it came from or how it appeared, it was really kind of weird."

As creative types often do, Owens is looking to the future with new projects in mind, focusing on videos for a YouTube channel and a sewing machine training video in addition to writing. "I'm really excited about all the traction my blog has gained recently and to see where it will go."