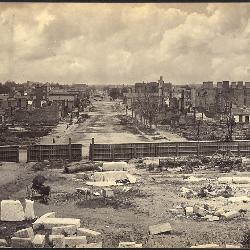 The burning of Columbia

In 1865, Gen. William Sherman's Union Army marched through Columbia, home of UofSC, and burned it to the ground.

Gen. William T. Sherman’s Union army is on its way to Columbia. A few days ago, his units burned much of Orangeburg, S.C. At least that’s what’s happening if you’re following along on Twitter.

“It’s a realm students are comfortable in. As a way of telling the story, it has certain strengths,” says Brown, Carolina’s Civil War and Reconstruction expert. “We wanted to tell a story that had many different voices and Twitter kind of lends itself to that. I also liked the day-by-day aspect of it.”

Rather than teaching the Civil War on a broad scale, Brown gave his students insight into the local view of history by examining the war in Columbia and ultimately, around campus.

“I like to think that students walk around with a different view of their surroundings,” he says. “For example, Sherman’s second in command stayed at the northwest corner of Bull and Pendleton. The house is still there and sure many students pass that house every day. And now they pass it and say ‘Oh, that’s where Gen. Howard stayed.’ ”

Students in the class agree with Brown. They did take away a better understanding of South Carolina’s history.

“It definitely gave me different view of the city of Columbia,” says Emily Quinn, a senior history major. “Being from a different state, I did not know much about the city’s history, but this class changed that.”

This narrow view gave the students insight into the bigger implications of the war and perspectives from both the North and South.

“We told the war narrative through Sherman’s march,” Brown says. “I think it’s fun to teach the Civil War from a particular angle. It’s easy to teach it like you’re at 30,000 feet and you’re looking down on a map of the United States. This way it is very local and you can get all the themes by making Sherman’s march your center.”

Students read and prepared their final assignments based on primary documents surrounding the historic march from Savannah, Ga., to the burning of the capital city from January to February 1865. Each student took a different primary source material for the basis for the research such as diaries of soldiers, civilians and prisoners of war in Columbia. For example, Quinn reviewed the diary of Emma LeConte, a 17-year-old Columbia resident who experienced and documented the burning.

“She had strong opinions and views about everything that was happening, and if her ideas were at all characteristic of others in Columbia at the time, it was very informative about the culture of the city,” Quinn says.

Brown’s students say preparing the tweets and reviewing these sources made the class stand out.

“In history, it's important to get more perspectives than just the victors. Preparing the tweets involved going through diaries of people who's stories don't always get told, such as women in Columbia and how they felt about the conflict,” says Katherine Saunders, a senior history major. “Learning about these different perspectives and seeing it in their own words was insightful and really humanized the war.”

Historic Columbia, a local nonprofit, has been sharing the class’s tweets using the hashtag #ShermansMarch. The tweets, which began Jan. 15, will continue through Feb. 20 when the last troops left the smoldering city 150 years ago. See what will happen next by following @HistColumbia.