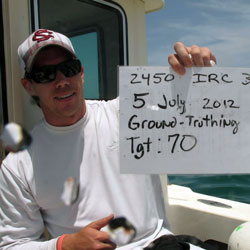 Bradley Dean graduated in 2013 with a master of earth and environmental resources management degree. Working for NOAA, he helped create a map of King Tides to help show the impact future sea-level rises would have.

Bradley Dean, who earned a master of earth and environmental resources management from the School of the Earth, Ocean and Environment, created an interactive Web map called “The King Tides Project: Snap the Shore, See the Future.”

The map shows the perigean spring tides, aka King Tides, at their peak — usually one to two feet above normal high tides. Map users are encouraged to photograph and video these events and share them with the King Tides Project via social media using #kingtides to create a shared resource for scientists and coastal managers to access.

“Using visual aids such as videos and photos along with examples and factual information helps users visualize the current impacts and better understand future conditions,” says Dean, who works in NOAA’s Charleston office. “Users can scroll through the map to see areas already exposed to nuisance flooding and potential sea level rise at specific locations.”

People can see the effects close to home or around the world on the map, Dean says, adding that more than half of the world’s population lives in coastal areas, with more than $1 trillion worth of private property, public infrastructure and businesses at risk.

Dwayne Porter, director of the Geographic Information Processing Laboratory at the Baruch Institute, says Dean’s current job was the direct result of an opportunity that grew out of another internship.

“His new job and in particular his efforts with the King Tides Project build off both the training he received as part of his master’s program and his practicum experiences with the Southeast Coastal Ocean Observing Regional Association,” Porter says.

Dean, who interned at Baruch when he was an undergrad at Coastal Carolina University in Conway, S.C., says the work he is doing fits nicely with his desire to conduct applied research.

“My goal has always been to bridge the gap between science and coastal management — making the science available to the people who are going to use it,” he says.