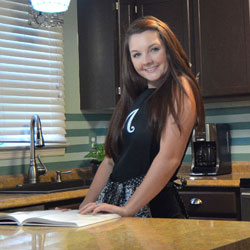 Michelle Gainey has recently released her first cookbook in a series on Southern cooking.

With a honeyed Southern accent that betrays her rural South Carolina roots and warm personality, Michelle Margocee Gainey feels like the ideal person to write a book on gourmet cooking from below the Mason-Dixon line. Gainey wrote, photographed and designed the layout and cover for her book, “A Southern Girl Goes Gourmet.”

“I am most proud of the fact that no one else worked on the book but me,” she says.

As a 2011 public relations graduate of the School of Journalism and Mass Communications, Gainey never anticipated that she would write any book, much less a cookbook. A picky eater growing up, she didn’t really care about cooking until she got married at age 21 and decided that she wanted to impress her husband with a little domesticity.

“I would cook a little bit and it evolved into a love that I never knew or appreciated,” she says. Eventually, friends and family were asking for recipes, and to ensure that they could get similar results when using her recipes in their homes, she assembled little recipe binders with detailed instructions.

After getting a professional-level camera a few years later and learning how to photograph the food that she was preparing, Gainey decided that she wanted to create a cookbook and used skills that she learned at the University of South Carolina to start down the path of self-publishing. In a twist of fate, she met a publisher from Manning and asked for a few words of wisdom regarding the publishing process.

“Later, she sent me an email saying that she had been dying to do a line of cookbooks and a relationship was born,” Gainey says.

Gainey isn’t stopping with just the one book, she has also been busy cooking up ideas for the next one in her series.

“Next is ‘A Southern Girl Has A Party’ which will encompass dinner parties, tapas and Super Bowl parties,” she says. “And my last one is going to be “A Southern Girl Cooks For Her Daddy.” Oh my gosh, how sweet is that?” Her current book is slated to be carried at Harris Teeter grocery stores, and possibly other outlets, she says.

Though Southern through and through, Gainey and her family will be packing up soon to head to Washington State for her husband’s military career, so she may have to rely on shipments from home of Duke’s mayonnaise and other Southern staples to get her through her next book’s writing, but she is ready for the adventure.

“Sometimes things fall in your lap that you’re not quite aware of,” she says. “So when you love something you should pursue it and make other people love it. That’s creating your own success and you’ll be right where you’re supposed to be.”