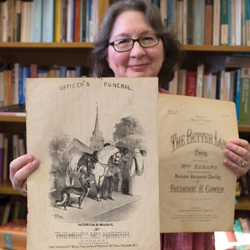 Paula Feldman has a tune stuck in her head that she wants to share with the world. The longtime University of South Carolina English professor isn’t a songwriter, though. Nor is she a musician. She’s more like an executive producer — for smash hits of the 18th and 19th century.

A Romantic-era poetry scholar, Feldman is working with the university’s Center for Digital Humanities and several Carolina students to resurrect long-forgotten music featuring lyrics by some of the best known poets of the British Romantic era by making it available online.

“I noticed that many poems of the Romantic era were published as lyrics set to music,” says Feldman, who began collecting sheet music several years ago as an offshoot of her book collecting endeavors. “Whenever I saw one of these (scores), I bought it, not with any purpose in mind except that it was something cool that someone needed to rescue.”

That “something cool” became something even cooler once she connected the dots between the artifacts and her scholarship.

“I began to realize that this was an important way poems circulated when books were very expensive. People sang them. They were a part of daily life in a way that we have never fully appreciated,” she says.

After commissioning a recording of Lady Anne Lindsay’s famous 1772 poem “Auld Robin Gray,” which Feldman played for a roomful of Romantic literature scholars at a conference a few years ago, she approached David Miller, director of the Center for Digital Humanities, about a larger project that would allow additional forgotten treasures to find an audience via the Internet.

With Miller and company on board, and with funding from a provost’s grant, the goal now is to scan the actual sheet music for several compositions, commission professional quality recordings, compile historical information to give the pieces context and then upload as much as possible to a new website for use by scholars, teachers, musicians and the otherwise curious.

The Romantic Era Lyrics Project website goes live later this spring. It is being built by sophomore computer science major Victor Reynolds, who pursued and won a Magellan scholarship to take on the project with encouragement from Miller and Feldman.

“I want to give people the experience that Paula’s hoping for, to let them experience these poems as songs, the way they once were,” Reynolds says. “These poems became famous because they were good songs first.”

Feldman, of course, agrees. The melody of “Auld Robin Gray” that continues to loop through her mind is evidence of the music’s staying power. But she’s also delighted by the project itself and by its collaborative nature, which she says has taken her scholarship in exciting new directions.

“Being a literary historian, I’m used to sort of going into my study with some books, reading, thinking — it’s very solitary,” Feldman says. “But this project involves working with teams of people: computer programmers, students on internships at the Honors College, musicians. We’re taking advantage of as many different talents on campus as we can.”

For more stories about faculty whose personal collections feed their scholarly pursuits pick up the March USC Times, on racks now.