Canary in a coalmine, crab on a coastline 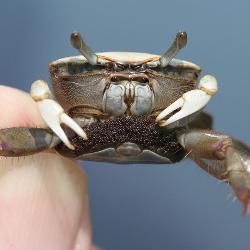 Steve Borgianini looks millions of years into the past with his research, but what he learns about days long gone has plenty of relevance to the here and now.

An evolutionary biologist, the University of South Carolina-Beaufort associate professor is interested in the fish-out-of-water story of, well, how fish climb out of water. Any sea-dwelling creature that’s eyeing a permanent move onto terra firma has a lot of evolutionary work to do, from learning how to breathe oxygen not dissolved in water, how not to dry out and how to conquer gravity without buoyancy as a crutch.

But given that life originated in the oceans, it’s clearly been done before. And there’s no better place than coastal South Carolina to study the many steps involved in the ocean-to-land transition, Borgianini says.

And owing to residential and commercial development, there is now a living evolutionary laboratory, in a sense, set up adjacent to the South Carolina coast. Buildings and impermeable roads and other surfaces have replaced forests and soil that once absorbed much of the precipitation from storms in the area. Water that used to take days, weeks, or years to recharge shallow aquifers and then trickle into estuaries is now diverted all at once as storm runoff.

“It’s kind of hard to think of freshwater as a toxin, but in our system it is,” Borgianini says. “It’s a great place to study saltwater-freshwater dynamics in estuaries and how altering patterns of flow in estuaries can impact the current species assemblages there.”

One organism he focuses on is the red-jointed fiddler crab, Uca minax, which appears to be in the midst of an evolutionary journey from surf to turf. In the early larval stage, it still needs saltwater to survive, but this crustacean lives its whole adult life in the semiterrestrial environment at the fringes of the estuary, where rain, groundwater seep, and freshwater streams and rivers create the freshwater habitat this crab seems to prefer.

By studying the effects that inundations of freshwater have on species like fiddler crabs, on the phyto- and zooplankton that serve as the base of the aquatic food web, and on the communities of plants and animals in the same environment, Borgianini is gleaning insight into the evolutionary ladder that sea critters must climb to leave behind the salty life and the life aquatic.

He’s also looking toward the future of the Lowcountry’s marine ecosystems — and the entire world’s coastline, for that matter. Local development is distorting the “water cycle” that brings freshwater intrusions into estuaries, and the sea-level rise predicted for coming decades will bring brackish water further inland everywhere. Understanding how shifts in the saltwater-freshwater balance will affect ecology is crucial for developing ways to minimize environmental consequences.

“I don’t think we can engineer our way out of this,” Borgianini says. “We’re going to have to deal with the circumstances that come along with it.”