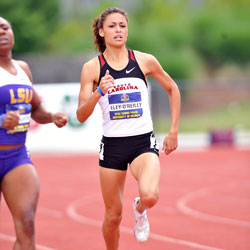 Leading from the bench

Plagued by injuries after her freshman year, Sanura Eley-O'Reilly continued to be a leader for the UofSC track team.

When you think of track stars as leaders, you typically think of them leading from the front with their followers trailing behind. But University of South Carolina sprinter Sanura Eley-O’Reilly knows a little about leading from the bench.

As a captain, battling injuries in her final three years on the team, Eley-O’Reilly had to help encourage her teammates to perform their best even though she could not help them on the track. And, she had been quite a help, with a 400m time around 53 seconds and frequently taking on the first leg of the Gamecocks’ 4X400 team.

“It was about motivating your teammates and keeping them focused on schoolwork and on the track as well,” Eley-O’Reilly says. “It’s about being available for your team when they need it – even if they don’t always want to hear it.”

The daughter of a U.S. Army major, O’Reilly was born in Ireland, but raised all around the world and the U.S. before her family settled in Fayetteville, N.C. (She still holds the record for the 400m dash among North Carolina high-school girls with a time of 53.43 seconds.)

Now, however, with a degree in international relations and a minor in women’s studies, she is looking at life off the track and is working toward another degree that will lead to a career as a midwife or nurse practitioner.

“I had to rearrange my life because I realized I wasn’t capable of being the athlete that I was,” she says. “So this semester, I am redefining what being an athlete means to me now.”

The choice of midwifery and nursing means she has to do some catching up with biology and science classes.

“I like the classes a lot and what I am learning, but it is definitely a lot more work than I have ever really taken on,” she says.

Eley-O’Reilly also is taking on a tall task as a Carolina Leadership Scholar, which means she is part of another team – one that will define what leadership looks like for UofSC students.

“Sanura has been absolutely fantastic in terms of her ability to offer insightful comments,” says Kirk Randazzo, political science professor and director of the Carolina Leadership Initiative. “She offers a different perspective and she really helps keep the group grounded in making sure we don’t forget about different populations of students that might be across campus.

“It’s really nice having her there, because she has no problem offering her opinion.

Eley-O’Reilly says she is excited about the team’s project for this year.

“It’s a good legacy to be part of,” she says. “I think there is great access to leadership roles on campus, but sometimes, it can get difficult for students to navigate.

“What we’ve been doing is trying to define leadership in all its forms so people can see how they can get involved.”