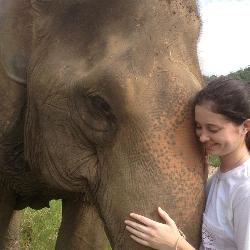 Senior Erin Steiner will present results of her international research at Discovery Day on April 24. The priority deadline for registering is March 6, and the final deadline is March 27.

Erin Steiner’s home of rural Elkin, N.C., has the many charms of small-town life, but after finishing high school there, she was looking toward new horizons.

“It was a wonderful place to grow up,” she says, “but I definitely was ready to leave my cute little town and move on to a place like USC, which has so much more going on.”

The University of South Carolina has served as the hub of an experience that has carried the senior across the world. She has volunteered at an elephant sanctuary in Thailand, attended classes in Ghana and volunteered with at-risk youth in India, just to name a few stops on the tour.

And it’s not just travel for travel’s sake. Over the past three years, she has used several grants to fund projects that research the global pervasiveness of a perception bias. Skin tone can affect the way people look at each other and themselves, both within and across cultures, and the actions some people take as a result of that bias, such as using hazardous skin bleaching creams, can pose serious health risks.

As a women’s and gender studies and political science double major, the bias is something she had taken notice of early in her academic career. “Here in the U.S., a lot of our major media, if they feature African-Americans, they’re very light-skinned African-Americans,” she says. “And they typically have Anglo features.”

Steiner wanted to turn those kinds of observations into research questions. The Office of Undergraduate Research was instrumental in her finding Shelley Smith, an associate professor in the sociology department, who helped her frame questions and harness some quantitative research tools along the way.

Steiner completed one project while studying at Christ University in Bangalore, India, her junior year. She showed photographs of men and women to 160 individuals and asked questions about their perception of the people in the photos — whether they looked attractive or intelligent, for example.

Although all of the participants in the study were given photographs of the same group of people to judge, Steiner had used Photoshop to tint the photos. Half of the judges saw a light-skinned version of a given person, and the other half saw the person with a darker complexion.

The verdict was not pretty: A statistical analysis showed that although the perception of a man appeared unaffected by skin tone, a woman was judged much more harshly if she had darker skin.

Steiner followed up with a study at the University of Ghana in Legon the following summer. Using in-depth interviews, she found similar biases and that many of the people who used creams to lighten their skin through bleaching had no idea how harmful the creams could be.

“Mercury is one of the main ingredients in the skin-bleaching creams that they use in India and in Ghana,” she says. “They are horrible for your skin.”

Just as a health concern, skin bleaching is a serious issue. About 30 percent of women in Ghana use the creams now, Steiner says. With urbanization, the market is expected to double in the next five or 10 years.

But there’s an underlying problem that Steiner hopes might someday be addressed. A pervasive notion that there might be something wrong with the way people of one’s own race look — whether it’s skin color, natural hairstyle or facial features — is inherently unhealthy, she says.

There’s no easy way to solve that problem, Steiner says, and she is particularly sensitive to any approach that involves people from one culture trying to suggest to another culture what they should and shouldn’t value.

But if beauty is in the eye of the beholder, it’s important to understand the lens that a culture can place between that eye and the object of its affection. Research can bring that understanding to light, and Steiner appreciates the intellectual tools Carolina and Smith, whom she calls a “fabulous mentor,” have given her.

She plans to work for a couple of years as she decides how best to pursue a graduate degree. Carolina gave her a scholarly foundation for whatever comes next, she says, and as a campus tour guide she tries to help spread the word.

“I tell my tours, all you have to do is say ‘Yes’ — to all the opportunities and resources that USC will give you, and if you do that, you’ll have such an enriching collegiate experience,” she says. “I said ‘Yes’ to Carolina, and I couldn’t be happier.”