'The lesson of more' 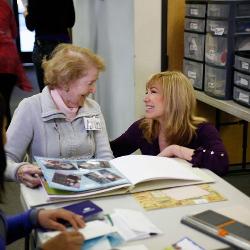 “Ms. Gibbons, it takes a lot more than a good voice to be successful as a broadcaster.”

Those words from University of South Carolina broadcast professor Richard Uray have stuck with Leeza Gibbons for nearly 40 years.

“Of course, I didn’t even have a good voice, that’s what was so ironic,” the 1978 broadcasting graduate says. “But I learned the lesson of ‘more.’ And I heard it in the classroom and outside. It’s more than your academic training; it’s more than the grades on your transcript. It’s being a part of your community. It’s finding your place, how do you want to serve, what do you want to stand for.

Gibbons will be coming back to her home state of South Carolina a lot more in the near future. Her recent win on the TV reality competition show “Celebrity Apprentice” has given her the fuel, she says, to jumpstart her charity Leeza’s Care Connection, which offers support and resources for families coping with chronic illness and disease, something her family had to do when her mother, Jean, was diagnosed with Alzheimer’s disease.

“On the show, I wanted to be as courageous as Mom battling her disease and as steadfast as Dad being her caregiver,” Gibbons says. “It puts the biggest smile on my face to think of how much wisdom and knowledge he has to share and how blessed we are that he will be such a powerful volunteer. There's no stopping Daddy when it comes to his passion ... where do you think I got it?”

Commended by Ivanka Trump in the final episode for her graceful leadership style and ability to rally her team, Gibbons won the grand prize of $250,000. For the season, she raised more than $700,000, the bulk of which will go to renovating and remodeling the Michael J. and Mary Meech Mungo Home in Columbia.

“There’s a big cycle of crazy happening on ‘Celebrity Apprentice,’ and it’s hard not to get sucked into that. But I’ve been interviewing celebrities for decades; I am very comfortable with people who take a lot of oxygen out of the room.”

“This has been really a big hole in my heart that we’ve been doing so much good work for a decade and we’ve never found the right opportunity in Columbia,” Gibbons says. “Winning ‘Celebrity Apprenctice’ was like having a magic wand and suddenly the door opens wide. And it opened really wide.”

The house was home to the late Columbia builder and longtime UofSC board of trustees member Michael J. Mungo. The Mungo family is leasing the house and nearly 2 acres of surrounding property to Leeza’s Care Connection for $1 year for 10 years.

“Job No. 1 is to restore the gardens and that was very important to the Mungo family as well,” Gibbons says. “We’ve already planted the bulbs, hopefully they will take, and in the spring, we’ll have color.

“We plan to create a serenity and healing garden that we will use for our programming that will open to the community. We hope it will be a really nice gathering spot for wellness and just a nice place to exhale, for people to gather their strength to face whatever journey they have ahead of them.”

“We created what we wished we had when our family was lost, frustrated and frightened while caring for my mom,” Gibbons says. “It was a promise I made my mom, to tell her story and make it count.”

Leeza Gibbons is a graduate of UofSC's School of Journalism and Mass Communications. To learn how you can help support the school, visit Carolina's Promise.