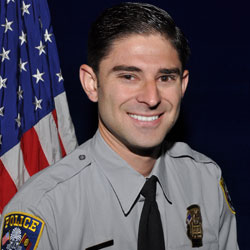 The USC Police Department is honoring the memory of one of their own by participating in the Midlands Heart Walk on March 21.

To most people, Vinny Bocchino was the picture of health. He was a runner, he worked out at the gym, played sports and was very health conscious. What many people could not see was that Bocchino had a heart condition that caused the 29-year-old University of South Carolina police lieutenant to collapse during a workout. Bocchino died last April.

“If you learned that Vinny had a heart issue, you’d look at him and think that it didn’t make sense because he was a picture of health,” said close friend and colleague Campus Police Maj. Jim Miles. Miles knew his friend suffered from heart issues but never expected it to be deadly for the young and otherwise healthy Bocchino.Besides forming a team to honor his memory, many colleagues in the police department really took the time to pay attention to their own health. “With what happened, it was an eye-opener that it doesn’t matter how much you run or how well you eat, you can be on a calendar and not even know it,” Miles said. Several officers went to the doctor for a physical and took up healthier lifestyles. “You can see that we’re still in pretty good shape, even a year later.”

Since Vinny’s death, Campus Police Chief Chris Wuchenich has really pushed his officers to make use of the university’s exercise and wellness facilities and to make time for regular checkups. It’s about the little things that can add up to better health, Miles said.

“I think that this heart walk and the funds that are raised and camaraderie that is built now that we’ve been personally touched would make Vinny proud,” he said. “The effect he had on me was to try and be as good to everyone you possibly can.”