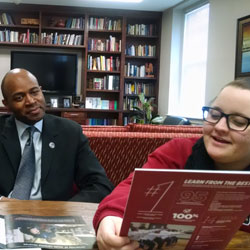 Preston Principal Bobby Donaldson and resident mentor Allison Ryan discuss ways to take the residential college to the next level.

These days, dorms are more than just dorms, especially at the University of South Carolina. They’re dynamic living and learning communities with clear mission statements, distinct visions and unique character. In the case of Preston Residential College, which is celebrating its 20th anniversary this fall, they also serve as incubators for future leaders.

“It’s a unique experiment that keeps getting better,” says Preston Residential College Principal Bobby Donaldson, now in his fifth year overseeing the residence hall’s continuing evolution. “The leadership piece has been integral to that.”

Along with a leadership retreat and other efforts, Preston now offers a leadership-based course that focuses on marketing, communications and strategic planning. This fall the course featured a powerhouse lineup of guest speakers, including alumnus and American Bar Association President William Hubbard and U.S. Congressman James Clyburn.

“There was an active dialogue between our residents and people who have distinguished themselves as leaders,” Donaldson explains. “We also offer a course on leadership in history and have leadership embedded in our University 101 and Speech 140 sections.”

But leadership at Preston stretches beyond the classroom. With residents representing each undergraduate academic year, plus graduate students who serve as mentors, Preston is built to harness student potential through every phase of higher education. In the process, the residents also get the chance to distinguish themselves in a supportive environment.

“When I came to USC I had a fear of being a small fish in a huge pond,” says sophomore social work major and resident mentor Allison Ryan. “I really wanted to find a way to make myself stand out, so that I was more than just a number.”

Through the Preston-based community service group Y-IMPACT —  Youth Impacting Minds, People and Communities Together —  Ryan became involved last year with efforts to help Columbia’s homeless. Now she takes groups of fellow students to volunteer at a local shelter once a week.

“Through Y-IMPACT I really found my passion for service, and leadership grew out of that. You’re surrounded by leaders here, people who influence you to get involved in different activities. This year I’m able to do that for others.”

In fact, Ryan is quick to shift the focus from her own efforts to those of her peers, mentioning another student who is forming an a cappella singing group and a third who is launching a literary magazine. The community also worked hard to support a fellow resident who was recently elected student body vice president.

“Most of our residents are leaders in some respect — leaders in student government, leaders in community service, leaders in the arts and culture, leaders in the classroom,” says Donaldson. “So we’ve adopted a leadership framework as a way to pull this diverse group together and still maintain their distinct identities.”

Graduate mentor Chiwoneso Tinago is also a part of that framework. The doctoral candidate in public health has been instrumental in reinvigorating the Y-IMPACT program and receives kudos from Donaldson. Like Ryan, she sees the Preston experience as transformative, though she can’t help feeling just a touch envious of the undergraduates she works with on a daily basis.

“I wish I’d had a place like Preston when I was an undergraduate,” says Tinago, who attended a small college in Mississippi before embarking on graduate studies at Carolina. “We had a residential facility, we had programming, but this is a place that builds you up. It is so much more than just a place to stay. It’s an experience like no other.”