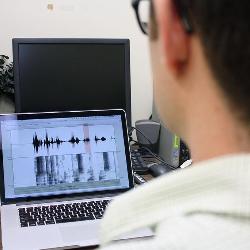 Anyone who has watched the Netflix series “House of Cards” knows that Kevin Spacey is supposed to be from the South Carolina Upstate, but what many people outside the state and outside linguistics circles don’t realize is that his accent is all wrong.

Spacey affects an accent more like that of Fritz Hollings, former U.S. senator and South Carolina governor from Charleston. The accent he should be going for is more akin to current U.S. Sen. Lindsey Graham, who grew up in Central, S.C., not far geographically and linguistically from Gaffney, S.C., Spacey’s character’s hometown.

“Spacey’s accent would not be Gaffney. Gaffney would not sound like that ever at all,” says University of South Carolina linguistics doctoral student Paul Reed. In fact, the accent is so far off to Reed’s ear, it nearly kept him from watching the show, which drips with Southernese.

“They’re probably just trying to get him to sound Southern in some way, because his accent is not even really completely Charleston. It’s akin to Charleston, but it’s the generation ahead of him. It’s certainly not Gaffney now, certainly not Columbia now and not even Charleston now.”

Spacey’s vocal miscue may be the result of what Reed calls a misrepresentation of a one-size-fits-all Southern accent.

“There is this misconception outside of the South that every Southerner sounds the same, which is a kind of humorous and slightly ridiculous assumption because we’re talking about 115 million people. There is no way that all of them are going to sound the same,” Reed says. “It’s the same way we have this misconception of everyone in New York sounding the same or everyone in Chicago sounding the same.

“As Southerners, we know that an Alabaman, a Tennessean, a South Carolinian all sound different, and even within a state we can detect differences.”

Those distinctions and differences, however, are shifting, and in some cases, disappearing, which is the subject of Reed’s doctoral dissertation.

As part of his research, he records his subjects as they are simply talking to him. He then asks them to read something, followed by an exercise in which they say words that seem to reveal or be most associated with Southern accents.

The stereotypical Southern long-i sound, known as monophthongization, is most pronounced in words like white and rice. Another, more subtle clue that you are talking with a Southerner is when certain words start to sound the same, like pen and pin or heel and hill.

He also notes the ways folks with fairly pronounced conversational accents work to cover them up as the tests become more blatant in their attempts to reveal them.

“I look at how people are connected to a particular place. I have some questions about how they feel about where they grew up, how they feel about where they live now,” Reed says. “Over the course of the interview, we draw their attention to speech to see what things they change. The South has one of the most distinctive and salient accents. Studies show that people view Southerners as sounding friendly, polite and likeable, but also sounding dumb.”

That can lead some Southerners to mask or cover up the more obvious parts of their accents, especially when dealing with “outsiders.” A Tennessee native, Reed himself seems to have tucked his own Cumberland Gap brogue into a box that he only brings out to make a point.

“I know the stigma about it. Where I grew up particularly is very poor, very rural and – even within East Tennessee – it’s kind of looked down upon,” he says. “I want to sound like I’m from there because I’m proud of it, but at the same time, people want to deduct a hundred IQ points when they hear me. That’s the internal struggle that I deal with and I think a lot of people have a very similar thing.”