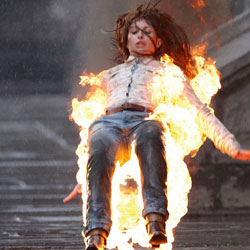 Don't try this at home

She's flown through windows, tumbled down stairs, jumped off buildings, been kicked and punched and felt her Wranglers burst into bright white flame. She's even been zombified — for the hit AMC series “The Walking Dead.”

Meet professional stuntwoman Jennifer Mobley: stage name, Jasi Cotton Lanier. In addition to high-octane ad work and post-apocalyptic horror gigs, the University of South Carolina media arts graduate has been banged up in popular shows like “Dexter,” “The Closer” and “The Young and the Restless,” and in movies like Tim Burton’s “Alice in Wonderland.” But bumps and bruises aside, she is as surprised as anyone by where she's landed. And landed. And landed again.

“I was on a track to get my master’s and possibly a Ph.D. Stunts weren’t even on my mind,” she says with a laugh. “Honestly, I just wasn’t the type of person you’d ever think would pick this career. I wasn’t a daredevil.”

She was, however, eager for experience. Mobley found herself in front of the camera before she graduated, cast in a couple of independent horror flicks directed by Carolina media arts alumnus Paul Talbot, and later moved to Hoboken, N.J., to study acting and Shotokan karate. She modeled some, mostly for comic books, picked up small parts in independent films and took jobs as a set decorator to pay off her student loans.

Meanwhile, she began practicing the ancient art of fire-eating, though like any good stuntwoman, Mobley makes turning herself into a human flamethrower seem as simple as roasting marshmallows. “I started fire-eating in my 20s and did that for years,” she says. “It was just something I saw and thought, ‘I think I want to learn how to do this.’ So I did.”

She was already doing stunt work, too, but inspired partly by an uncle who had been in the business, she eventually struck out for Hollywood to take things to the next level. Now relocated to Atlanta after some time in L.A., she continues to land jobs and is currently signed on with multiple projects, including one as a stunt coordinator. And while she’s reluctant to say she’s “made it,” she recognizes how far she’s come.

“I was set-decorating for many years and acting in a lot of independent movies and music videos, and there was a point when I no longer did that and just did stunts,” she says. “That felt like a turning point: ‘Oh, now I’m a stuntwoman. This is it, all in, all chips on 17 black, let’s hit.’”

A self-described “gym rat,” she now spends as much as 20-30 hours a week working out between jobs, which is essential to be successful, she says, but also for her own safety.

“One of the main things we do is hit the ground, whether that’s from a car hit, or a stair fall or just hitting concrete, and as a stuntwoman it’s often done with little to no pads,” she says. “People are like, ‘You don’t get a pad?’ No, the actor gets a pad, we get the ground. So, do we get banged up? Yes, absolutely. That’s part of the job.”

The job also requires passion and curiosity — things she got in spades at Carolina, she says, calling the late UofSC media arts professor Harry Miller her mentor.

“I stayed in touch with him and visited him until he passed,” says Mobley. “That man was constantly learning, reading, going to art exhibits, seeing movies, experiencing things to the very end. Just seeing him live that kind of life was a huge influence. Had I not met him, I don’t know if I ever would have done stunts.”

She also gives a nod to South Carolina Honors College senior associate dean emeritus Jim Burns, whose office was once across the hall from Miller’s. She often visited them one after the other and credits both with lighting the metaphorical fire that crackles inside to her to this day.

“You shouldn’t just go to class and do your work, that’s not why I went to college,” she says. “I wanted to be excited, and those two professors were so inspiring and did so much for me that I wanted to go above and beyond. That’s what education is supposed to be. I was excited to learn and wanted just to keep learning.”

Jennifer Mobley isn't the only University of South Carolina graduate living the rough and tumble life of a Hollywood stunt double. For more death-defying action check out "Carolinians on Fire" in the spring 2015 edition of Carolinian magazine.