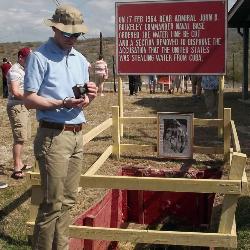 Allison Marsh's historic site interpretation class trekked to Guantanamo Bay for spring break to interview residents on the U.S. Navy base about everyday life at Gitmo.

The U.S. naval base at Guantanamo Bay has had some seriously bad press over the past dozen years as the detention center for people deemed enemy combatants following the 2001 terrorist attacks.

But the base was there for a century before that and was home to thousands of service members, their families and civilian contractors from both the U.S. and other countries.

A group of University of South Carolina public history graduate students trekked down to Gitmo, as it is known, during spring break this year to interview some of the people living and working there now, to hear their stories.

“The purpose of this trip was to document the everyday lives of the residents at Guantanamo Bay,” says Allison Marsh, director of UofSC’s public history program and professor of the historic site interpretation class that made the trip. “That includes the military, their dependents, civilians, contractors and foreign nationals.”

Among those civilians is Marsh’s sister, who has worked at Gitmo for more than two years. That connection helped Marsh get her students on base to do research that she considers a vital addition to a national project called the Guantanamo Public Memory Project.

That project includes stories about Gitmo as the place where hundreds of enemy combatants are being held, but just as important are the stories of the people who live and work there today.

“I think the project really was an effort to try to explore the context of Gitmo and give it more historical breadth,” student Alyssa Constad says. “The one thing that the larger project really didn’t get at was being able to give voice to the people who actually live there.

“With the military base and the separation from the rest of the country, it is a very unique and isolated culture.”

Constad, who is getting a master’s in public history with an eye toward becoming a museum curator, says her primary function during the trip was to collect as many oral histories as possible and to help gather archival material at the base that was taken to another university to be digitized.

The students’ oral histories will be included in the collection for the larger public memory project and the class is preparing three exhibits to be added to the traveling exhibit that will visit UofSC’s McKissick Museum in the fall.

Just being in such a unique place was a learning experience for most of the students.

“It is one of the most surreal places you can imagine going,” says Gary Sellick, a history Ph.D. student in Marsh’s class who has decided also to pursue a master’s in public history based on his experience. “You can see the line where Cuba starts. You expect this tropical paradise, but my perception was blown out of the water. There are mountains, desert scrubland, it was fantastic.”

“In many ways, it’s not so much like you are visiting a foreign country, but more like you’re going back in time,” she says. “It’s very much a military installation. You see the Quonset huts from the past, but there’s also a lot of new construction. There is a McDonald’s.

“It’s like America, but just a little bit off.”

One big adjustment for the 21st century student is the very 20th century technology that is available.

“There is no cell phone coverage there and Internet speeds are circa 1998. Things like Skype are almost impossible, you can’t download your video from Netflix.”

To learn how you can support research at the University of South Carolina, visit Carolina's Promise.