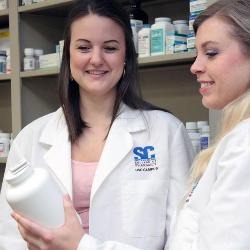 UofSC undergraduate students will present the results of their research project at the annual Discovery Day event, 8 a.m.-5 p.m., Friday (April 24) at the Russell House.

A child’s sore throat swells, blocking his airway and doctors must work quickly to help him breathe. The attending physician, one Dr. Peter Benton, turns to the nurse and orders “ceftriaxone 750 mg IV q12.” The dramatic sequence occurred in the first season of television’s “ER.” The problem? The medication order was wrong.

“When using ceftriaxone, an antibiotic, for this indication, it is only dosed once daily not twice (q12= every 12 hours),” says SC College of Pharmacy student Alexas Polk. “So that would be one medication error for this series.”

Polk and fellow pharmacy student Sarah DeMott researched nearly 5,000 medical orders given on television medical shows since 1989 (Doogie Howser, M.D.). What they found was that fictional TV doctors were wrong about 12 percent of the time.

But, it’s just TV, right. What does it matter?

“Research has shown that patients get a lot of their medical information from these shows,” Polk says.

The information from fictional shows mixes in with real information they get from other sources to the point where patients can’t remember which “facts” came from which sources.

“They will come in to their doctor and say, ‘Can’t you do such and so?’ and the doctor will have no idea what they are talking about because it’s not real,” Polk says.

The project made use of about 15 students watching hours and hours of TV shows and noting medical orders. It is the first big research work done by either student and one of the first to explore the topic. Polk and DeMott are presenting their findings at the University of South Carolina’s annual celebration of undergraduate research, Discovery Day.

The pair were aided in their research by a Magellan grant, which several other Discovery Day presenters have used to complete their projects.

Connor Brunson began thinking about his research when he took a course in the Arnold School of Public Health about inequality in health care. The class learned about a study at an Atlanta hospital that showed doctors prescribed less pain medication for minorities with a tibia fracture — a very painful injury — than they did for white patients, leaving the minority patients to deal with more pain.

“Doctors were subconsciously believing that minorities would not follow through or would abuse their medication so they gave them less,” Brunson says. “That was just a complete shock to me, because I had viewed the medical system as some place anyone could come and get the same treatment. It was then I realized that’s just not true.”

His Discovery Day project focused on how a person’s living situation affected his or her opinion of the health care system. Homeless people, for example, had a much more negative view of the system than people who had secure housing.

“By simply not having housing, your experience with the medical system is worse, a general sense of being unwelcome,” Brunson says.

While the final analysis seems intuitive, Brunson says, health care providers could learn something about treating homeless patients and how to adapt standard methods of care — especially aftercare — to be more effective.

It is a lesson he plans to take with him to medical school and into his career as an emergency room physician.

Monica Bowman says her research could very well become a book one day, but she is not sure whether she will write it.

The history major from Beaufort, S.C., says growing up with a stay-at-home father who had majored in history during his college days planted the love of studying the past. But, it was her hometown and the details of South Carolina history that informed her project looking at the life of Reconstruction-era politician and mason Richard Howell Gleaves.

Gleaves was born in Philadelphia in 1819 and came to Beaufort after the Civil War and went into business with Robert Smalls. He purchased property in the town, including the land where a black fraternal hall was built and is now called the Sons of Beaufort Lodge. Gleaves also served as the 55th lieutenant governor of South Carolina.

Two of the most intriguing things Bowman found in her research was how little people had looked at some of the materials available on Gleaves and how important he was to masonry.

“He spent a really long time building his Masonic career as well as his political career,” she says. “But after Reconstruction ended, he fell from the political heights and was never able to recover.”

Bowman plans to pursue a master’s degree in history in Charleston after graduation.