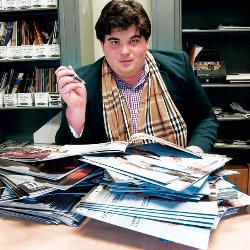 From internship to dream job

Senior Chris Rosa landed his dream job as an entertainment writer for VH1 before he walked across the stage at graduation.

Not many college graduates land their dream job before their diploma is in hand but Chris Rosa’s hard work at the University of South Carolina landed him that coveted gig.

Just a few weeks after graduation, Rosa, a senior public relations major, will move to the Big Apple to work for VH1 as an entertainment writer, producing content for the Web about music and celebrities.

“I’ve always wanted to do something that I love doing, having my job not feel like a job,” he says.

Rosa didn’t get the job by chance. He started working toward it in middle school when he found his love for journalism at his school newspaper.

“I remember thinking this is what I want to do. I want to write about movies and music and television and I want to find a way for me to do this for my life,” he says.

As a sophomore at UofSC he applied for more than 50 internships. He even got one rejection from The Boston Globe on Christmas and two rejections from Disney for one position.

“My goal has never really changed. Sometimes I thought I should change my mind because this is so impossible, everyone wants to be Giuliana Rancic,” Rosa says of the E! reporter. “I came close to doing something else, something more practical, but when I asked myself if I’d be happy, the answer was always no.”

The rejections didn’t stop him. Ultimately, he landed positions with Viacom’s MTV and Conde Nast’s Details magazine. He chose MTV because he loves entertainment more than fashion.

“The first summer I worked at MTV I loved it. I met a lot of great people and I knew I wanted to return to Viacom the next summer but I wanted to try something different,” says Rosa.

He found a position working with Viacom’s VH1 where he took a lot of initiative, writing stories and pitching ideas the summer before his senior year. That hard work paid off when the editors asked him to stay on board during the school year as a freelancer.

“I loved it even more than I loved MTV, and I thought I really liked MTV,” he says. “The stars just kind of aligned.”

Rosa wrote freelance pieces his senior year on top of a full load of classes and serving as editor-in-chief of the student run magazine, Garnet & Black.

“G&B is the hardest thing I’ve ever done because I wasn’t just in charge of my thing, I had to plan an entire editorial calendar, work with art and photo and style and things I never really worked with in my life,” he says. “It taught me how much I can handle. I think that going into VH1, I’ll be a lot less scared to take on projects.”

As a public relations major in the College of Information and Communications, Rosa took as many writing classes as he could in both PR and journalism.

“I’ve always wanted to write for a magazine or write for an entertainment website. Those jobs want you to capture their voice and style and humor,” he says. “I learned a lot how to do that through public relations with writing brand-specific content for a company. I just translated that to the editorial space.”

It’s not just writing about pop culture that has Rosa excited for his first big job. He’s thrilled about working for VH1, where he found a real connection as an intern.

“What I really love about VH1 is that it’s a bunch of people who love pop culture, who love talking about it, love writing about it and live and breathe it, sort of the way that I thought I was the only person on Earth who did,” he says. “Going into a place where people are just as enthusiastic about Britney Spears as I am, was really refreshing.”