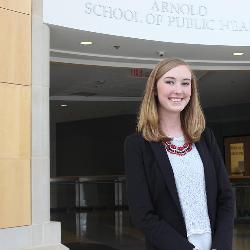 It’s not just for political science majors. Public health major Kara Jones landed a job in D.C. with The Galen Institute, a public health policy research organization, while participating in the South Carolina Washington Semester Program. Administered by the South Carolina Honors College, the Washington Semester is open to all Carolina students. “I would recommend it to all students — it’s a great opportunity no matter what your interests are,” Jones says. “It was an incredible experience.”

Senior Kara Jones is graduating this May, and the light at the end of her academic tunnel is shining bright from the nation’s capital.

A few weeks after commencement, she will start work as an analyst for The Galen Institute, a nonprofit health policy research organization located in the D.C. suburb of Alexandria, Va. It’s a perfect place for Jones, a public health major, to make an impact in a field she’s passionate about.

“Galen advocates policies that support individual responsibility, consumer choice and transparency within health care. They want to create a more patient-centric health system,” she says. “That goes along with what I like to say is my goal as a student of public health — to help increase access to health care and also increase the quality of that care while decreasing the cost in a sustainable way.”

Jones knew that securing any job — not to mention one putting her at the forefront of one of the most pressing political and policy issues of the day — was hardly a safe bet in the current job market. But she had a trump card to play in her final semester as a Gamecock.

Earning a slot in the South Carolina Washington Semester Program this past spring in D.C., she joined a group of 13 undergraduates from Carolina and three from other colleges in the state for the spring semester in the nation’s capital. Each student completed an internship matching his or her skills and interests. For Jones, that meant a stint with the American Health Policy institute, a nonpartisan think tank that focuses on the impact of health policy on large employers.

At AHPI, she worked under Tevi Troy, the former deputy secretary of the Department of Health and Human Services. One of her largest projects was studying the administrative costs of the Affordable Care Act on large employers. She also wrote talking points for Troy’s speeches and media appearances and provided research for his articles and books, which in the past have included best-sellers about presidential history.

“Of course I had written papers for class before, but I had never done formal research as a job until I worked at AHPI,” Jones says. “I learned a lot there and it turned out to be a lot of fun.”

The internship was just part of the semester program, which was a full immersion experience inside the Beltway. She and her cohorts, most of whom were political science majors, took part in evening classes throughout the term. They included weekly discussions and debates of D.C. issues; a series of lectures led by Carolina’s Don Fowler, former chairman of the Democratic National Committee; and a theater course organized by the University of Maryland’s Korey Rothman that Jones says helped broaden the experience beyond the political and policy framework students were often focused on.

“We saw the 'Man of La Mancha' at the Shakespeare Theatre, we saw 'The Widow Lincoln' at Ford’s Theater, where President Lincoln was assassinated, which was really cool, and a few others,” Jones says. “Something that I didn’t know going into the program is that D.C. is the second-biggest city in the nation for theater, right behind New York City.”

Jones took advantage of opportunities that abound for interns in the program. She attended a panel discussion about King v. Burwell, a Supreme Court case in which plaintiffs are challenging subsidies being provided for health care policies obtained through federal exchanges when the wording of the statute reads “Exchange established by the State.”

One of the panelists, Grace-Marie Turner, founded The Galen Institute in 1995, and Jones introduced herself after the discussion — coming prepared with a resume, business card and copy of an article she had written about the ACA’s employer mandate. Turner writes a weekly blog for Forbes, and she later put a link to Jones’ article in it. A few weeks afterward, Jones had accepted a position at the institute.

“I know that there is no way I would have ever gotten this job right out of college without having done the Washington Semester Program and having had these advisers — like Sara Corwin, who was really helpful — at the Arnold School of Public Health,” Jones says. “They were so willing to help me when I was getting in to the program and also here in Columbia, where they put on career workshops with former students who would Skype in and talk about how they landed jobs after they graduated. USC has been a real help and the Washington Semester program was also a huge help in me getting a job right out of college.”