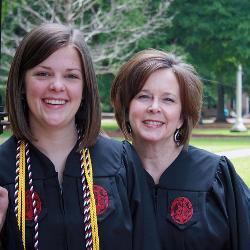 Lisa and Katie Jerald are sharing something few mothers and daughters get to do together: Graduate from college on the same weekend.

Four years ago when Katie Jerald started classes at the University of South Carolina, her mother, Lisa, was trying to finish up her own degree, which had been put on hold decades earlier for marriage and a family.

Now, mother and daughter will graduate on the same weekend: Lisa with a degree in sociology and Katie with a business degree in marketing and human resources.

Lisa Jerald, who has spent the past six years working as the university’s student ombudsman, says she could have graduated in December if she had taken a course last summer, but decided to put it off after consulting with Katie, who was all for sharing the spotlight.

“She's my best friend and I'm just so proud of her,” Katie says of Mom. “I think being able to share this time with her is something that's really special. It's not something a lot of mothers and daughters get to do.”

The two never had a class together, though Lisa was in a class with one of Katie’s friends and they did have the same professor, just not at the same time.

“There is a common family factor involved in both of their successes – determination,” says Stacey Bradley, associate vice president for administration, Student Affairs and Academic Support and Lisa’s boss. “Lisa’s graduation is such an inspiration to those whose plans may have been deferred a bit by life. And Katie is not only an exceptional student, but shines even brighter when sharing this special time with her mom.”

For Lisa, her degree marks the culmination of a journey that began 30 years earlier when she was studying interior design at Winthrop University in Rock Hill, S.C.

“Originally, I didn’t know what I was going to get a degree in when I went back to school, so I took a sociology course and realized it has a lot of application to the job I do every day,” Lisa says.

Katie had more of the typical college experience, but her work as a U101 peer leader and helping students with the transition to college from high school has her considering a career in higher education, just like Mom.

“It makes me feel good, knowing I am making a difference,” Katie says. “But I didn’t want people to think, ‘You’re following in your mom’s footsteps working with students.’ I want to make my own reputation, not ride on her coattails, even though they are great coattails.”