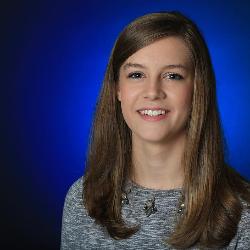 Caroline Roberts found a community at UofSC that is both challenging and nurturing.

Caroline Roberts has identified two things that are central to her development as a leader: her faith and challenges that put that faith to the test. At the University of South Carolina, she has found a home where the latter is strengthening the former.

A native of Columbia, Roberts has been part of the First Baptist Church community all her life. She was involved in their media ministry for six years, heading in early on Sunday mornings to help produce a television broadcast of the service that was transmitted throughout South Carolina and parts of Georgia and North Carolina. She teaches a bible study, plays in a band with fellow musicians and serves as a worship leader.

She also found a pathway there to Student Leadership University, a Christian leadership-training program she attended for four summers, “graduating” the summer before her senior year in high school. She was able to see some of the world through the program, which was located the first summer in Orlando, Fla., followed by Washington, D.C., Europe then Israel and Jordan.

That experience, and working on the staff of youth ministry camp in Winnsboro, S.C., the past two summers, helped her grow as a leader, she says, but it also gave her something to reflect on in the first class she took toward a leadership minor as a freshman.

“One great thing about the summer camps is that you learn how to work alongside other strong leaders — but it’s also one of the hardest things I’ve ever had to do,” she says. “The leadership studies course taught me that part of being a leader is being able to give up some of your leadership for the betterment of the group. Sometimes you have to step back and let someone else take control for the team to move forward.”

The class was invaluable in motivating considerable self-reflection, she says, helping her recognize some personal qualities that were hallmarks of good leaders. After two years of pre-pharmacy studies as an undergraduate, Roberts will enter the doctoral program at the South Carolina College of Pharmacy this fall.

“I think that one of the most important qualities that a leader can have is the willingness to search for something new, the willingness to innovate,” Roberts says. “In pharmacy, you’re looking to find new and improved ways to solve problems, which is something a good leader is always trying to do.”

Still an active member at First Baptist, Roberts has broadened her Columbia experience to include Carolina, a community where she has found she can get just the right combination of nurturing and challenge she needs to grow.

“It would have been easy to and comfortable for me to go to a Christian university — and I’m not saying that people who go to Christian universities can’t grow in their faith, by all means they can — but I know that the way I grow is from being challenged,” she says. “That is one thing I love about this university. We have so many different cultures, different values and different faiths. You have other people who challenge the things that you believe, and I think that is so important to growth as a person and as a leader.”