The doctor of nursing practice will see you now 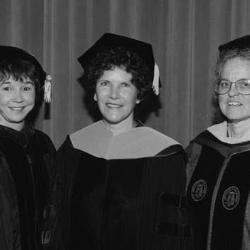 UofSC's doctor of nursing practice program has evolved over its 15 years to continue meeting the health care needs of South Carolina and the nation.

When Ashley Sirianni looks for role models in the health care industry, she doesn’t have to go far from home. Her father, Dr. O. Marion Burton, was the associate dean of the University of South Carolina School of Medicine, former president of the American Academy of Pediatrics and current medical director for the state health and human services agency. Her mother, Debbie Burton, worked for years as a registered nurse in a state health department clinic, hospital and as the S.C. Army National Guard's occupational health nurse.

“I got to travel around with my dad and play doctor’s helper, and watching my mom care for oncology and HIV/AIDS patients, it gave me that passion and dedication to serve others,” Sirianni says.

But it took a UofSC College of Nursing program, developed while she was still an undergrad, to help her realize her dream of caring for patients in rural South Carolina.

The doctor of nursing practice program at UofSC is marking 15 years this year and is expanding to include a psychiatric/mental health specialty starting in the fall. It is just one of the innovative changes made since UofSC’s doctorate became just the fourth such program in the nation.

“My passion is holistic care and I felt that nurses get to spend more time with their patients,” Sirianni says. “With the knowledge we obtain in our program, we are able to treat diseases like hypertension and diabetes, especially in the area I am going, where they don’t have access to specialists.”

When Sirianni completes her degree later this year, she plans to work in an underserved area of South Carolina, such as nearby Fairfield County.

Almost all (92 percent) of the graduates of the doctor of nursing practice program stay in South Carolina, College of Nursing dean Jeannette Andrews says. More than two-thirds of them work in underserved areas.

Andrews says the program has graduated more than 200 students since starting 15 years ago and she gets at least two calls a week from a practice or hospital looking for nurse practitioners. “The demand is really high,” she says.

When the program first began, it was just the fourth one in the country.

“Not all faculty members thought it was the way to go,” says Mary Ann Parsons, who was the College of Nursing dean when the program was created. “There was some internal debate.

“But we just said, ‘why not us?’ and decided to do it to accommodate those students who wanted to continue their education, but didn’t want to pursue research or a traditional career in academia.”

Most of the first DNP students, Parsons says, were already nurse practitioners and wanted to expand their education to look at issues in health care on a broader scale while remaining in a clinical setting, providing direct patient care.

Now there are many similar programs across the country and the College of Nursing continues to adjust its program to meet the health care needs of the state and the nation.

Most of the students in the Carolina program work full-time, so it is offered online with clinical work done in the students’ local communities. By creating specialty options, such as family practice or acute care geriatric practice, the college was able to reduce the number of credit hours needed to about 70 from 94 – a still-rigorous course of study, but one that can be completed in four years.

And, the rule of thumb that once sent nurses out to practice a few years before returning to school for advance degrees no longer holds, Andrews says.

“In my generation, we were told to go and work for 10 years, then get your master’s then work for 10 years and get your doctorate,” Andrews says. “Now, we’re having students in their 20s getting their doctorate and that’s a good thing because they will impact the profession much longer at that higher level.”

In addition to being nurse practitioners, the DNP graduates also act as advocates for better health care, as administrators and as professors.

“The DNP program prepares nurses to influence major change in health care through leadership skills, professionalism and advanced knowledge,” Williams says. “It made me a better leader: I now see issues globally, understand how they interact within systems and how I can move change forward.”

And there is room to grow.

“We are pushing toward a higher-educated nursing work force,” Andrews says. “And this program like so many we have started here at USC shows our innovation and response to health care needs in the state.”