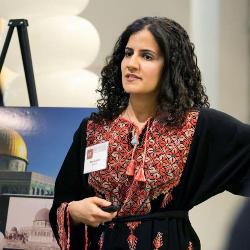 Asma Jaber's passion for preserving the history of her parents' homeland leads to the creation of a mobile app called PVIOT.

Some of the world’s oldest artifacts are located in some of the world’s most volatile locations, making them vulnerable to destruction either intentionally or as collateral damage. Digitally preserving the history of those items and locations and providing easy access to images and stories about them is the goal of technology startup PIVOT.

PIVOT is the brainchild of Asma Jaber, ’08 anthropology, and her soon-to-be-husband, Sami Jitan. Although both grew up in Greenville County and are the children of Palestinian refugees, the two did not meet until they were traveling in the Middle East, crossing a border.

“We are building a company called PIVOT the World Inc. and creating an app called PIVOT,” she says. “At the same time that I am building that, I am working at Harvard. I put a lot of heart and soul into both, but PIVOT is something I am building from the ground up.”

PIVOT won first place in a startup competition at the school’s Innovation Lab and will be the subject of the company's first digital tour. Archival images and information will be used to spotlight the history of the campus.

The mobile app also will have points that show images for individual places over time and Jaber says they hope to make use of images from individual collections as well as official archives. “People can use it from home to see what a place looks like now and what it looked like in the past, or they can look at the archival images while they are taking a tour,” Jaber says.

Next up will be the historic Palestine area of the Middle East.

“I grew up listening to stories about my parents’ homeland of Palestine and what things used to be like,” Jaber says. “So I really grew up with this vivid imagination in rural South Carolina about a place very far away. I almost had recreated it in my mind.”

Jaber was in graduate school and living in Palestine when her parents were in a terrible car crash back home in Greenville. Her mother survived, her father did not.

“It was after he passed away that I began to feel a lost connection to all of these places and to his memories,” she says. “And I really wanted a way to reconnect with them.”

That’s when the idea for PIVOT was born.

“It did start with the story of my dad but it really became about these places that are changing drastically over time, villages that were wiped out and things have been built on top of them,” she says. “It’s not just in Palestine and it’s not just places in the Middle East. Our mission really has the element of preservation, especially with these places that are at risk of being lost.”

It is her intense connection to her parents’ homeland that has been a driving force in Jaber’s life and career, but she credits the University of South Carolina's Office of Fellowships and Scholar Programs with setting her out on that path.

“Asma was, as she continues to be, passionate about human rights issues,” says Novella Beskid, director of the fellowships office. “Her genuine concern for others coupled with her leadership and service work were recognized with her receipt of the Truman Scholarship. The USC Truman Scholarship committee had no doubt Asma would be a tireless public servant and indeed, she has not only met, but surpassed, our expectations.”

As a 2007 Truman Scholar, Jaber spent time working in the U.S. Justice Department in Washington, D.C.

“That led me to decide I didn’t want to do law school though I really still have a strong interest in human rights law, especially related to Palestine because of my family connections,” she says. “It’s these kinds of things, like the Truman Scholarship, that lead you to other opportunities."