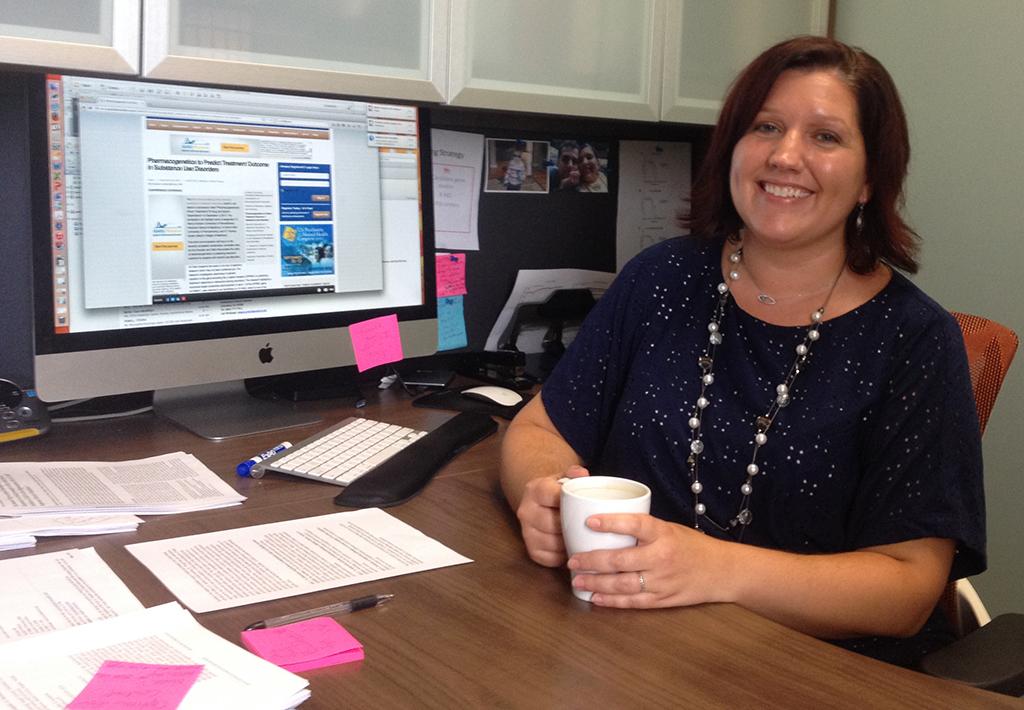 Jill Turner's laboratory recently published research showing how  brain circuitry is wired differently in individuals with a single difference in their genetic code.

Growing up in West Virginia, Jill Turner saw firsthand the kind of havoc that drug addiction can wreak.

“I had a lot of friends who had very promising lives and promising careers ahead of them,” the assistant professor in the South Carolina College of Pharmacy says, “but they ended up either overdosing or going to jail for drug-related stuff. It’s one of the reasons I went into drug addiction research.”

Turner has been studying one of the fundamental biomolecules contributing to human addiction: the mu-opioid receptor. It’s a protein in the human body that is affected by many different drugs, from nicotine to alcohol to heroin.

One particularly interesting aspect of this opioid receptor protein is that a seemingly small change in its makeup can have a dramatic effect on many of the behaviors of the creature it is part of. Every protein is made of up many individual subunits called amino acids, and a variation in just one of those amino acids can sometimes mean big changes for the whole organism.

There’s only a limited number of amino acids — about 20 — that are used to construct proteins, which are often on the order of a few hundred amino acids long. So a protein is kind of like a mosaic made up of amino acids. With 20 ‘colors’ to choose from, and a few hundred ‘pixels’ in a protein, the cell constructs a mosaic of a protein that has, in a manner of speaking, a distinct image.

Altering just a single pixel in an ordinary mosaic results in very similar image, perhaps identical at first glance. In the biomolecular world, though, a single change in the makeup of the mu-opioid receptor has dramatic effects.

Among humans, there are two relatively common versions of the mu-opioid receptor that differ only by one amino acid, sometimes called the A variant and the G variant. In Caucasians, the G variant only makes up perhaps 5 percent to 15 percent of the population. Population studies are still relatively new, but some associations between individuals having the variant and their behavior are becoming clear, Turner says. People with the G variant of the protein can quit smoking more readily. They’re less susceptible to alcoholism. They’re less likely to become addicted to heroin and can kick the habit more readily. As children, they seem to be more resilient in the face of stressful situations, such as abuse by elders or bullying.

Turner is fascinated that such complex human behavior can be altered by just one amino acid. That protein difference arises from a singular difference in DNA: Organisms that have the G variant of the protein are said to have the G allele.

“At least for myself, it’s hard to imagine that a single change in your DNA — one point, one nucleotide — can have such an effect,” Turner says. “How does it translate into such dramatic changes in behavior, in social responses and in pleasure seeking?”

Her lab has delved into the molecular details of that process. In a paper her team recently published in the journal Neuropharmacology, they addressed one of the fundamental questions researchers have been asking about the difference between individuals with the A and G variant: Is it caused by a difference in amount or in function of the mu-opioid receptor?

Working with an animal model that has been shown to replicate addictive behaviors closely analogous to those in humans, the team compared individuals with the two variants. They found evidence that the G variant gives rise to a different kind of neural system in the hippocampus, a substructure in the brain.

With the G variant, for example, the response to added morphine was attenuated in the hippocampal microcircuitry. An alternate hypothesis — that the differences brought about by the G variant are the result of smaller amounts of the protein being expressed there — wasn’t categorically rejected, but the evidence for loss of function in the opioid receptor is strong, Turner says.

Adding to the fund of knowledge about the opioid receptor, she adds, will increase the clinical potential that already exists for personalized medicine.

“Say someone is an alcoholic, and you don’t bother testing for these genetic variations and give the patient a drug like naltrexone to help manage alcohol addiction,” Turner says. “Then they come back to you and they’ve relapsed. If you had genotyped them prior to giving them the drug, you would have known you should give them something else. They needed a different drug.

“That’s really the whole idea of pharmacogenomics, which is really cool.”

The primary research article in Neuropharmacology is available online.