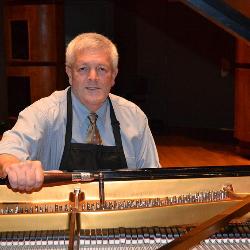 Under the (piano) hood

Paul Williams clearly remembers Feb. 14, 2007, not because it was Valentine’s Day, but for the concert given by jazz pianist Chick Corea. Leading up to that performance by the Grammy winner, Williams worked feverishly tuning and voicing the piano Corea would play. “I was nervous until the sound check,” Williams recalls. “Mr. Corea played for a few seconds and said, ‘That’s great.’ ”

“I guess I got that one right,” says Williams, who is the director of piano services in the School of Music.

During his 25-year career as a registered piano technician, Williams has gotten the tuning, voicing and repairs right hundreds of times. He has worked on instruments used in ensembles featuring the likes of Itzhak Perlman, Yo Yo Ma and Winton Marsalis. Most recently he tuned the piano used by Academy Award and Grammy winning songwriter Burt Bacharach during a visit to the University of South Carolina.

A student of piano throughout of his childhood, Williams mastered works by Chopin and Mozart. He saw concerts by leading pianists, such as Van Cliburn and Arthur Rubenstein. And he grew up thinking he would one day be a professional with a career in the spotlight. But his father, a banker, persuaded him to pursue “more practical” career options, Williams says. “I studied engineering, then business and finally earned a degree in political science.”

But working for a subsidiary of publishing giant McGraw Hill for a few years was enough to convince him to reconsider a piano career. So Williams got his piano back from a cousin and got it tuned. As he watched the technician tune the instrument Williams thought, “I can do that.”

A two-year apprenticeship under Steve Brady at the University of Washington followed; where he learned to do everything from replacing strings to rebuilding keyboards. It was an ideal environment to learn, Williams explains. “The university offered a variety of projects that I could take on.”

He completed his training and passed the certification tests to become a registered piano technician. For 15 years, he was self-employed, logging more than 50,000 miles a year while working on pianos throughout the state of Washington. He then moved to the Midwest to serve as a staff piano technician at the University of Nebraska. He was in Lincoln, Neb. for eight years.

Last year, Williams moved to Columbia to join the staff at the School of Music. As the director of piano services, he’s responsible for keeping as many as 375 piano pedals, 11,000 piano keys and 29,500 piano strings in working order, which includes tuning and voicing the school’s four Steinway & Sons concert grand pianos.

Of 120 pianos in the School the Music one stands out to Williams. “It’s one of the concert pianos in the Recital Hall,” he says. “No. 99. It sounds exactly the way I like a piano to sound. The key action is nice. The voicing is great. It has tons of power. It just sings.”