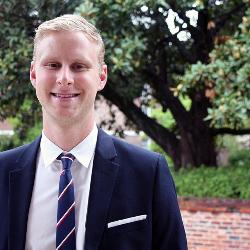 Perry MacLennan is an associate in Haynsworth Sinkler Boyd’s Charleston office, where he focuses his practice on business, commercial and construction litigation.

In preparation for his biggest court appearance to date, Perry MacLennan, ’14 law, recalled one of his last classes at the University of South Carolina.

It was called Fourth Circuit practice class, about 15 students, meeting once a week in the evenings, with federal Judge Dennis Shedd of the U.S. Fourth Circuit Court of Appeals.

“You would stand up and argue a topic he had sent you in advance,” MacLennan says. “While you were arguing, he would pepper you with questions.

“Immediately after each argument, he would give you feedback. It was criticism, but in a positive way, in a way that made us better at oral argument.”

In a trial by fire, MacLennan got to put what he had learned to use into real life in front of the South Carolina Supreme Court, arguing successfully on behalf on his client less than a year after he graduated.

“I was pretty nervous, my heart was definitely pounding,” MacLennan says of his 15 minutes before the justices. “I tend, when I get nervous, to fidget, so I had to grab the podium to keep still.”

He says the skills provided by Shedd’s class were invaluable in preparing for his appearance.

“That class did really well in getting you out of your comfort zone,” MacLennan says. “I learned to think on my feet. It’s an experience that students at most law schools don’t get.”

After graduation, MacLennan was hired by the firm Haynsworth Sinkler Boyd, where he had worked as a clerk on the case he would argue before the court.

Haynsworth partner Don Sellers, ’73 law, was the lead attorney on the case and asked MacLennan to help write the brief that was filed with the Supreme Court before the arguments were heard.

“Our firm, ever since I have been here, has tried to give young lawyers an opportunity to get into court,” Sellers says. “It doesn’t matter if you’ve been practicing for 10 years or one year, you’ve always got your first time in front of the Supreme Court.

“I think he did pretty good.”

Sellers says he and other attorneys at the firm grilled MacLennan probably harder than the justices did. MacLennan says that really helped, too.

“I did practice sessions with other attorneys on the case and they were just as tough as the judges,” MacLennan says. “They also told me to be prepared for an oddball question. You just don’t know what kind of questions they are going to ask.”

MacLennan says he is grateful for the attorneys at the firm who gave him the opportunity so early to have such an experience.

“I owe a debt of gratitude to them, as well as my mentors at the firm, for giving me the confidence and encouragement I needed to be effective,” he says.