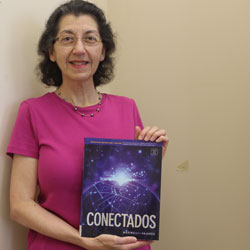 Patti Marinelli has helped create what she thinks is a great textbook and online curriculum for teaching Spanish.

But you don’t have to take her word for it. A pilot study conducted at the University of South Carolina incorporating second language acquisition theory confirmed that the text, “Conectados” (Cengage Publishing), helped students learn to write and speak Spanish better than students in a traditional classroom course and those in another flipped classroom section using a different textbook.

“‘Conectados’ reinforces the general rule of thumb in language teaching that you don’t do in the classroom what could just as easily be done at home. With this model, students study at home and do in the classroom what they can’t do at home: speak Spanish with other people,” said Paul Malovrh, an associate professor of Spanish at Carolina. “Patti’s book, which uses a flipped classroom model, leads students to become engaged and take ownership of their learning.”

In the study, Malovrh and fellow Spanish faculty member Nina Moreno taught three times per week in flipped classroom sections of Spanish 121 (Malovrh used “Conectados” and Moreno taught with another text). The control group was a traditional section of 121 that met four times per week.

Data from pre- and post-teaching testing showed that all of the students progressed in their Spanish language mastery, but the flipped courses, which met one less day per week, outperformed the traditional course, particularly in writing and speaking. Students using “Conectados” did better than the other flipped classroom model, Malovrh said.

Marinelli, a senior instructor of Spanish who has taught at Carolins for 36 years, has written other Spanish textbooks in the past, but “Conectados,” which she co-authored with Karin Fajardo, became a labor of love. She worked on the text for more than five years, and the publisher pulled out the stops in creating an engaging online curriculum.

To get added insight on how students perceive and react to online language learning components, Marinelli enrolled in an online Spanish course before she began writing the textbook. What she learned from that experience and from years of webinars on language instruction helped inform her approach to the book.

“It’s a change in language instruction,” she said. “We’re now requiring students to take an active role in learning, and I think ‘Conectados’ accomplishes that in some fun ways like having students post pictures and then comment in Spanish on each other's photos. That mirrors what students do every day with social media. The payoff is that they see that an exercise like that really improves their understanding and ability to do real-world communication in Spanish.”

Moreno appreciates how the textbook and related curriculum allow students to process the new learning forms in small chunks “and the clearly defined learning path of ‘learn it, practice it, use it,’ ” she said.

Malovrh appreciates that “it’s totally geared for Millennials. The videos and photography are high quality, and it’s suited for students doing a lot of the homework on their smart phones or tablets.”

While “Conectados” has been adopted as the standard curriculum for beginning Spanish instruction at Carolina, Marinelli, Malovrh and Moreno are considering what’s next.

“We’ve talked about moving beyond classrooms of Spanish language speakers to creating a virtual campus community of language — connecting all students studying Spanish,” Malovrh said. “Then we could assign students to talk to many different students in Spanish, not just from their course section but from any of the sections. Ultimately, that’s how you use what you’ve learned.”