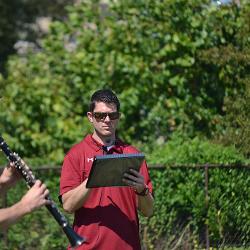 Strike up the band

Cormac Cannon puts the 375 members of the "Mighty Sound of the Southeast" through their paces at preseason band camp.

Did you grow up in a musical family?

I did. My father’s a pianist. He encouraged my brothers and sisters to take lessons. I’m the youngest of six children, and we all played piano for a little while. I started playing drums in high school and my parents didn’t mind the noise. I remember one time I was loading my drum kit into my mother’s car and she asked why I didn’t play the piccolo.

What do you have planned for 2015 football season?

Carolina Band will perform nine times this season and we have seven different shows planned, including our traditional military appreciation performance. Some of the themes this season are “Summer Hits,” which will feature songs of the summer; “Back to the Future,” a show that will highlight great moments in Carolina sports; and a show titled “Carolina Band, Famously Hot.” That show will showcase music related to heat and fire.

Speaking of heat, how are you adjusting to the Columbia summer?

You know, I don’t mind it. The air conditioning here is so powerful or something, I’m actually freezing everywhere I go. I lived in Austin for a while. When my wife and I moved there the city was in the middle of more than 30 days of 100-plus degree temperatures. It’s kind of humid in Austin, but not like this. But I know enough about the heat to take care of myself.

Back to the music, can you name some of the artists you’ll feature this season?

We will play selections from Maroon 5 and Bruno Mars to Frank Sinatra and Fall Out Boy. One priority is to offer a variety of music selections. Football audiences are diverse, and the music will appeal to students and older fans too. I hope they’ll like everything we play, but at some point in the season they’ll hear something that’s a favorite.

Any changes planned for the band?

My goal is bigger impact at sports and university events. And impact isn’t just about playing loud but playing well together and making a great sound. A unified sound is an impactful sound. That’s the biggest priority that I’ll have. Members of the band will immediately notice the difference in the way I rehearse and teach the music. But they know all conductors are unique in that way.