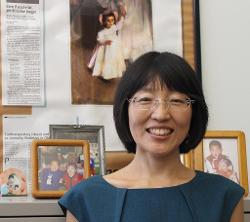 In a study led by Xuemei Sui of the Arnold School of Public Health, good cardiovascular fitness was shown to reduce cholesterol levels throughout life. High levels of fitness delayed the onset of high cholesterol by 15 to 20 years on average.

Exercise has a reputation for doing a body good, and some Carolina research recently showed just how far even a little bit goes. Staying in shape can keep the heart and circulation young, slowing — by some 15 to 20 years — the natural process that causes cholesterol levels to rise with age.

Xuemei Sui, an assistant professor of exercise science in the Arnold School of Public Health, led a team that looked carefully at some of the most commonly assessed markers of heart and circulatory health: cholesterol and triglyceride levels.

Working from a dataset of more than 10,000 men collected over 36 years, the researchers plotted how those levels changed with age. They found that total cholesterol levels, for example, slowly but steadily increased from the early 20s until about age 50. After plateauing in the early 50s, total cholesterol then slowly declined.

“This is something that has been known for a while now, that cholesterol levels increase early in life but are lower in the elderly,” Sui says. “We’ve done a quantitative assessment in this study, and we’ve also looked at more than just total cholesterol.”

Examining HDL, LDL, non-LDL and total cholesterol in addition to triglyceride levels, the team found that all but one of them followed the trend of increasing into middle age, then tailing off thereafter. The exception was HDL cholesterol, often referred to as “good” cholesterol; its levels steadily increased throughout life.

The heart of the study was a look at how physical fitness affected cardiovascular markers. The team used a treadmill test to assess the study participants, recording the amount of time each was able to keep up with a progressively more demanding pace before exhaustion. The top, middle and bottom third of scores were categorized as indicating individuals with high, medium and low cardiorespiratory fitness.

The three groups had strikingly different cardiovascular profiles. LDL, or “bad” cholesterol, for example, is usually defined as medically problematic at 130 mg/dl or higher. Study participants in the “low fitness” category hit that mark at about age 30 on average, and the number climbed steadily until the mid-40s.

Participants in the top third, or “high fitness” category, didn’t reach the 130 threshold until about age 50 on average, and they never exceeded it, with their LDL levels plateauing and then dropping from that age forward.

The results were similar for all of the cardiovascular markers, with participants in the high fitness category showing, on average, profiles that are 15 to 20 years “younger” than those with low fitness.

According to Sui, moving up in cardiorespiratory fitness level is not as demanding as it might seem: running marathons is not required.

“What is recommended is 150 minutes of moderate activity a week,” she says. “That can be brisk walking, bicycling, or jogging for 30 minutes a day. Just enough to get the heart rate elevated, to get a little bit out of breath.”