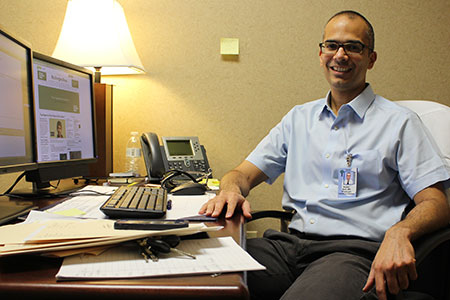 New faculty member Rajeev Bais is helping the School of Medicine lead in the effort to ensure that international refugees, one of the most vulnerable populations in the world, can find access to health and wellness programs that will help them rebuild their lives.

The School of Medicine recently brought in an international health expert from Queens, N.Y., Dr. Rajeev Bais, who says that one path to expanding the school's global mission leads right back to Columbia.

"You really don't need to go abroad to start a global health initiative," Bais says. "We have global health right here in our back yard. All of the problems of the world, both politically and health-wise, are manifested in these patients."

The patients he's talking about are refugees who have already been settled here in South Carolina. Columbia itself has about a thousand international refugees or asylum seekers, he says. And they've been through a lot.

"Refugees are probably the most vulnerable people in the world," Bais says. "There's nobody who has gone through more trauma and witnessed the worst that humanity has to offer than a refugee."

Many have endured suffering that most Americans can hardly imagine.

"There is one girl who's father was murdered, whose mom was raped. Her sisters were raped and she was raped, and this was not just once, but multiple times," Bais says. "All of her sisters got pregnant from rapes. She got pregnant and had a kid, and then she found out she was HIV-positive.

Since arriving in Columbia in September, Bais has opened the Carolina Survivors Clinic, an outreach program originally focused on victims of torture and human rights abuse. But seeing the dearth of medical and psychological services dedicated to refugees in the area, the team decided to expand the services to all comers among refugees.

Physicians are skilled at treating the body, but often there are injuries that they can't see, Bais says. The refugees come from war-torn areas, where witnessing horrific events is common and torture is prevalent.

"When refugees arrive here they get a screening exam, and they look for medical problems like tuberculosis, syphilis, intestinal parasites and that sort of thing," Bais says. "But what they don't screen for, and they should, is torture. So we decided to do the health screenings also, and look for torture and other things in a more comprehensive way."

That will help identify problems that might have been overlooked before, and Bais and his colleagues are working to bring relief to their patients with a number of different approaches. Beyond the physical and psychological prescriptions that modern medicine can offer, the Carolina Survivors Clinic is building an outreach program that brings refugees in touch with a surrounding community that Bais has found can be eager to find out about their lives.

The team has worked with the Office of Sustainability to develop a refugee garden initiative within the Carolina Community Farm and Garden, where refugees can grow foods unavailable in supermarkets that remind them of their faraway homes. It helps draw out older refugees who can get isolated, Bais says, and students are often touched by their stories and eager to learn about their lives and culture.

The team is currently trying to develop a scholastic soccer program for kids. It involves after-school tutoring followed by soccer instruction, with the hope that down the road there might be academic or athletic scholarships for children of refugees.

They're also working with the public library system to provide English conversation classes. The model is a program Bais became familiar with while he was completing a fellowship in Louisville, Ky., and involves bringing people from the community into conversations with refugees. Friendships often develop, with learning going both ways, he says. Many Americans are struck by the positive outlook of folks who have been through so much.

"That's the amazing thing: the resilience," Bais says. "Obviously it's a spectrum, and some people have a very hard time, especially if they've lost children, but most people, they look to start a new life, to work to become part of the community. They have a lot of hope for the future."