When last October’s floodwaters in Columbia spilled into Chris Emrich’s front yard and threatened to flow through his front door, he was ready.

While Emrich’s wife moved household goods to a higher floor, he arranged sandbags in front of the entrance way of his split-level home. The longer the rain fell, the more sandbags he stacked. When the flood receded, his house was still dry.

It’s not surprising that Emrich had a disaster plan for his home. As associate director of the University of South Carolina’s Hazards and Vulnerability Research Institute, he makes it his business to be intimately familiar with disasters of every stripe — hurricanes, tornadoes, earthquakes, wildfires and more.

“It’s what we do: study vulnerability to potential disasters across the U.S. while also interpreting data from past disasters,” Emrich says. 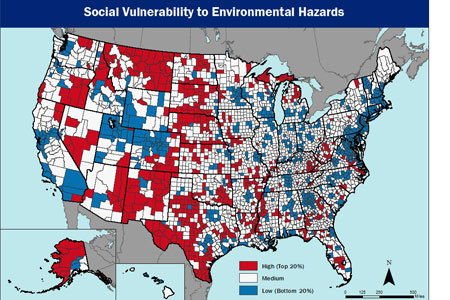 The institute's Social Vulnerability to Environmental Hazards map assesses every county and parish in the U.S.

Analyzing vast archives of disaster data and using a digital mapping technology called geographic information systems, the institute has created the Social Vulnerability to Environmental Hazards Index, which takes into account the population types of every county or parish in the country, their economic status and the potential financial losses that might result from disasters both natural and man-made. The idea is help emergency management agencies plan recovery efforts when disasters strike so that the most vulnerable communities aren’t left behind.

The Hazards and Vulnerability Research Institute enjoys a solid reputation today because of the work that its founder, geography professor Susan Cutter, established more than 20 years ago when she began working with the state’s emergency management infrastructure. Drawing on her own expertise in hazards studies and a wealth of talent on the geography faculty, she set up a hazards research laboratory. 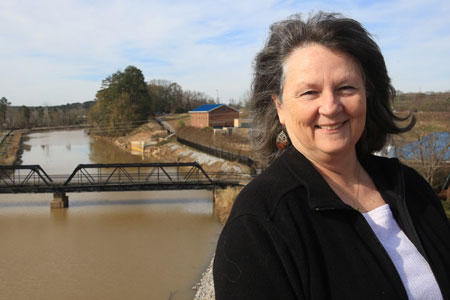 Susan Cutter started a hazards research lab in 1995; the lab became the Hazards and Vulnerability Research Institute in 2006.

“We were among the first to use remote sensing and geographic information systems to study hazards, and very quickly USC became the place to get an education in hazards research,” Cutter says. Since achieving institute status in 2006, the Hazards and Vulnerability Research Institute now includes faculty associates ranging from civil engineering, to history, public health, law and elsewhere.

“We’re focused on research and outreach that provides best practices, guidance and expertise to the nation concerning natural and man-made hazards,” Cutter says. “We were involved during the recent flood response in South Carolina, running models for the state to determine the potential flooding based on 100-year flood plain for every county. You need that to calculate how much damage might occur and what that might cost.”

Since 1998, 22 Ph.D. candidates and 34 master’s candidates have completed their degrees during their association with the institute. The university has added a concentration in emergency management to its Master of Public Administration degree that will expand the number of professionals in governmental, nonprofit and profit sectors who can plan for and respond to natural and man-made disasters.

The storm that wrecked the Gulf

When Hurricane Katrina hit the Gulf Coast in August 2005, Cutter and a colleague went to Carolina’s vice president for research and laid out a plan for gathering perishable data such as images of the damage and human observations and recollections.

“A natural disaster is like a crash site; investigators want to gather evidence before it degrades,” Cutter says.

The Office of Research made $400,000 available for competitive grant proposals across the university, and research teams from several areas, including criminology and criminal justice, civil engineering and geography later used those seed funds to garner much larger research grants from federal agencies.

Cutter and other geography faculty and grad students quickly set out for Mississippi.

“A lot of areas were cordoned off, so we had to get credentialed by FEMA to get past the military check points,” she says. “We took tents, food and water and found the only campground in southern Mississippi that still had electricity.” 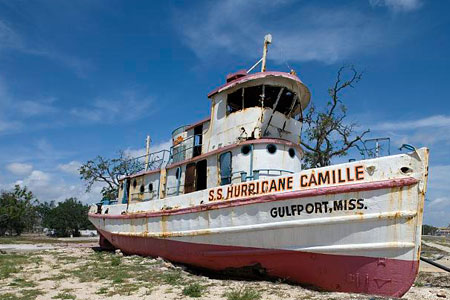 The S.S. Hurricane Camille ended up on land after Hurricane Katrina came ashore.

They wanted to learn how far inland the storm surge had traveled in different places, so they looked for markers such as boats stranded in the middle of forests or cars washed into fields. The idea was to return to those places in subsequent years and monitor the rate and extent of recovery.

“We took photos facing north, south, east and west, and for the past 10 years, we’ve gone back to those same places using GPS coordinates to take more photos and gather more data,” Cutter says.

“As a researcher it’s depressing to see these places that once were vibrant and are still not back 10 years later. Hancock County, Miss., is like a patchwork quilt; you’ll see one house rebuilt and several more missing on a street — just a concrete slab for the foundation where the house used to be.”

In studying a region like the Gulf Coast after a natural disaster, one basic question resonates: Why do some areas recover more quickly than others? Some of it is money, Cutter says, and some is related to leadership and having a community advocate to rally everyone.

Understanding the dynamics of disaster recovery involves more than the outward trappings of rebuilding. That’s why the Hazards and Vulnerability Research Institute tapped into the expertise of one of its faculty associates, Carolina history professor Mark Smith.

"I looked back at the basic history of the region over time, examining race, class and resources from the 19th century through the 20th, then compared Katrina with the 1969 devastation of Hurricane Camille that also struck there,” Smith says. “There were vast differences in how politicians responded, but the recovery trajectory was the same: The poorest people took the longest to recover from Camille in ’69 and were the longest to recover from Katrina.

“So we have a story of continuity. The governors in both instances were highly responsive to businesses, and that’s how the recovery funds were distributed,” Smith says.

“A hurricane doesn’t discriminate about who it affects but it exposes pre-existing prejudices and inequalities that exist in a place. Do you perpetuate those realities or do you use disaster recovery to change those inequalities? History isn’t a policymaker but it can present information to those who can make informed choices.”

Threats in the Palmetto State

The Palmetto State has had its own brushes with natural disaster. Hurricane Hugo in 1989, a severe sleet and ice storm in 1973 and a sudden snowstorm in 2000 come to mind. October’s flooding, especially across the eastern half of the state, highlighted the fact that flooding is the most frequent and costliest disaster type in the U.S.

But the most significant threats in S.C. are severe weather and hurricanes, Cutter says.

“Many citizens focus on hurricanes to the exclusion of other threats,” she says, “and the potential for tornadoes is often ignored. The two presidential disaster declarations we’ve experienced in S.C. have come from ice and flooding.”

There is seismic potential in S.C., as well. One of the biggest earthquakes to hit east of the Mississippi was in 1886 near Charleston, and that remains a low-probability but high-consequence risk for the state.

Another such risk involves the hundreds of miles of rail lines that crisscross the state, Emrich says. Emergency planners don’t know when hazardous materials are being transported through their counties, and, in the event of train accidents, it can sometimes take hours to identify what chemicals are involved in spills.

“Railroad cargoes are a known unknown,” he says. “Emergency managers can’t be proactive because they don’t know what’s coming through their counties at any particular time of day.”

Learning from past disasters and anticipating future events is what keeps the Hazards and Vulnerability Research Institute staff on their toes. And again, Emrich has his own tale to tell. After the October flooding, he kept his sandbags ready. One month later, heavy rains fell again and this time the county-maintained storm drain that runs through his yard failed. Resulting runoff breached his sandbag defenses and caused $23,000 damage to his home.

“Now I know what it’s like to be on the other side of disaster,” he says.