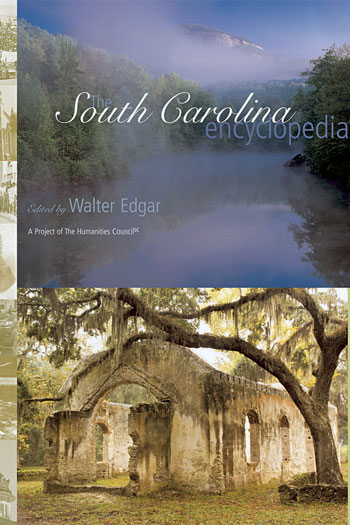 An interdisciplinary team is working to take the comprehensive book "The South Carolina Encyclopedia" into the digital age.

Ten years after its launch as the most comprehensive reference book on the Palmetto State, “The South Carolina Encyclopedia” is getting ready for a second act, this time on the digital stage.

The 1,120-page encyclopedia, a joint project of the S.C. Humanities Council, USC Press and the Institute for Southern Studies, was published in 2006 and contains nearly 2,000 entries comprising more than a million words. The encyclopedia covers topics ranging from war and politics to the arts, recreation, agriculture, industry, popular culture and ethnicity. The digital version of the encyclopedia will include all of the original material from the print edition integrated with new multimedia resources.

“There was always the idea to move the encyclopedia to a digital version, but funding was an issue,” says Matt Simmons, project coordinator of the university’s Digital U.S. South project.

“Phase one of the project will create a website with all of the material from the print edition, plus multimedia assets,” Simmons says. “We hope to have that completed by the end of the year. We don’t yet have funding for the second phase, but that will involve developing procedures for continually updating information in the encyclopedia.”

The digital version of “The South Carolina Encyclopedia” is being supported by USC’s Center for Digital Humanities; University Libraries and its partnership with the S.C. Digital Library, a consortium of more than 50 libraries and historical societies from across the state; the S.C. Humanities Council; USC Press and the College of Arts and Sciences.

“We are thrilled to support the Digital S.C. Encyclopedia project, and the broader Digital U.S. South initiative,” says Colin Wilder at the university’s Center for Digital Humanities. “These efforts have great cultural significance for South Carolinians, as well as helping spread the work of scholars at USC and beyond to the broader public.

“This is a great example of what people call ‘public digital humanities,’ and is exactly what the Center exists to support.”

In the years since the print encyclopedia was published, several encyclopedia-worthy events have occurred, including Nikki Haley’s election as the state’s 116th — and first woman — governor, construction of Boeing’s new 787 Dreamliner plant in Charleston and removal of the Confederate flag from the Statehouse grounds. Those and many other developments must be incorporated into the new digital version of the encyclopedia with the same scholarly rigor that characterized entries written by nearly 600 contributors to the print version, says Bob Brinkmeyer, director of the Institute for Southern Studies.

The second phase of the digital encyclopedia project will also involve developing a mobile app that can be used when visiting places of historical interest around the state such as historic sites or state parks. The app could be especially useful on K-12 field trips.

The encyclopedia’s original editor, history professor emeritus Walter Edgar, worked on the print edition for seven years and is pleased that a digital incarnation is finally happening.

"I am delighted that there will be a digital version of the ‘South Carolina Encyclopedia’ so that information about our state can reach a wider audience,” he says.

Learn how you can support digital projects like "The South Carolina Encyclopedia" through USC Libraries.