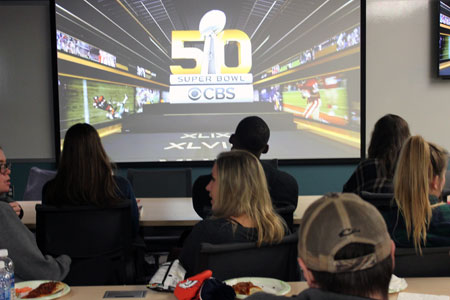 That’s the verdict from the 100 students and faculty in the School of Journalism and Mass Communications who gathered Sunday night to watch the game and critique the commercials.

This is the 13th year students in Bonnie Drewniany’s Super Bowl of Advertising class have ranked the top commercials that air during the big game. The students use special remote controls to evaluate the national commercials on likability, persuasiveness and brand identity.

In the T-Mobile #Ballogize ad, Harvey, who mistakenly crowned the wrong woman as the winner of the pageant in December, apologizes to T-Mobile customers for making a mistake, and then blames Verizon for the error.

Heinz came in second with its dachshunds in hot dog suits, while Bud Light and Audi tied for third.

The students have spoken, but the Carolina community – faculty, staff, students and alumni – is invited to vote for their favorite Super Bowl ad until 10 a.m. Monday (Feb. 8).

The advertising team from T-Mobile will be invited to campus to speak to the class, share behind-the-scenes stories about making the commercial and receive the coveted Cocky Award. Previous winners include Coca-Cola (Make it Happy, 2015), Cheerios (Gracie, 2014) and Budweiser (Brotherhood Clydesdales, 2013).

For Mary Carolyn Moore, a senior public relations major from Lexington, South Carolina, the class gave her a chance to learn how consumers respond to various types of advertising pitches.

In the first quarter, she said she liked the Audi commercial, a spot that looked back at the golden age of space travel while David Bowie's "Starman" played.

“A lot of companies are playing to straight humor even if it’s juvenile or they are pulling on emotions like family and real friends," she said. "It seems like most of them are going those ways.”