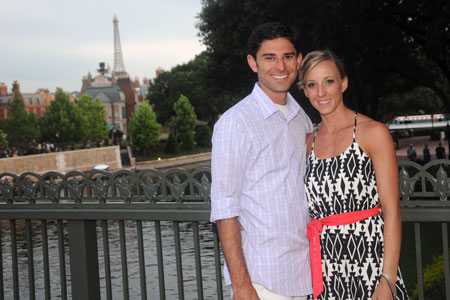 Vinny Bocchino and Brittoni Reynolds had been friends for years before they started dating.

Vinny Bocchino, '08 M.Ed., knew the importance of looking out for his heart. A lieutenant with the University of South Carolina Division of Law Enforcement and Safety, Bocchino had known since he was 14 years old that he had a heart condition. So he took the best care of his heart that he could.

He worked out, ran half-marathons, he ate healthy. Despite his efforts, he suffered a heart attack nearly two years ago and died at the age of 29.

In his memory, Bocchino’s girlfriend and one of his best friends on the campus police force are leading the university’s team for the annual Midlands Heart Walk.

“If Vinny were here, he would tell you that he had the years he did because he took such good care of himself and his heart,” says Brittoni Reynolds, Vinny’s girlfriend and assistant director for Campus Recreation at the University of South Carolina.

USC Police Maj. T.J. Geary was Bocchino’s friend and mentor at the police department, where Bocchino had worked since coming to Carolina for graduate school. 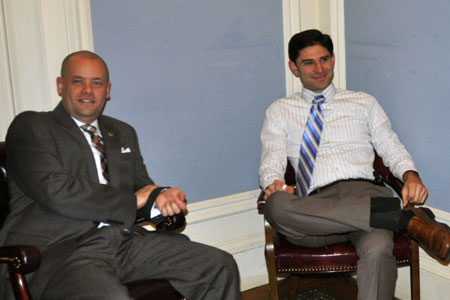 T.J. Geary was Vinny Bocchino's friend and mentor at the university's Division of Law Enforcement and Safety.

“I think his life inspired a lot of people from the standpoint of trying to be better in his honor,” Geary says. “Certainly, his death was eye-opening for a lot of people, maybe reminding people of their own mortality. He was fit and healthy.”

The Heart Walk is the American Heart Association's top event for raising money to combat heart disease and stroke – two of the nation’s top killers. The event is designed to bring awareness to the diseases and to promote physical activity and heart-healthy living.

“I think a lot of people take their hearts for granted,” Reynolds says. “So I want to make people aware of the risks.”

“My participation in the walk is to make others aware of their heart and to get it checked,” Geary says. “The more you know, the better you are. Everybody should be exercising, everybody should be eating healthy. I’ve got two kids at home, I want to make sure I can see my grandkids.”

The university is one of the larger participants in the walk. You can sign up for an individual team or join Team USC.

The Midlands Heart Walk starts at 8 a.m., March 12, at Colonial Life Arena on the UofSC campus. The 3.3-mile walk route goes across the Congaree River to West Columbia and back. A “Miracle Mile” route is also available.