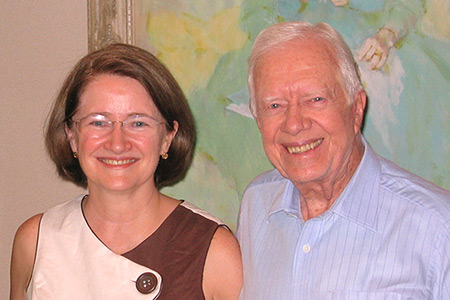 Marjorie Spruill’s ideas about politics, women’s rights and racial injustice were planted along the banks of the Pamlico River in rural North Carolina, where she was raised in the 1950s and '60s.

As college students in the early 1970s, the Spruill sisters became reformers. Active in student government, Marjorie concerned herself with the treatment of minority students and the women’s rights movement, becoming an early member of the National Women’s Political Caucus.

“I was idealistic but never radical,” Spruill says. “I always believed in working within the system. I believed very strongly that you could bring about positive change that way, and my experiences in those days seemed to confirm that.”

Her college experiences informed her work as a history student and scholar whose research spans the suffrage movement in the South to how the events that divided American women in the 1970s are connected to the polarized politics that has gripped America since 1980, when the two major political parties chose sides between feminists and their conservative challengers.

It’s the later topic that will be the focus of an upcoming talk by Spruill, which will take place at 6 p.m., Tuesday (March 22), in Capstone House. It also is the subject of her forthcoming book with Bloomsbury Press, titled “Divided We Stand: Women’s Rights, Family Values & the Polarization of American Politics.” Her lecture, which is free and open to the public, is part of a new faculty series by the College of Arts and Sciences’ History Center.

Spruill says both the Republican and Democratic parties supported the women’s movement in the early 1970s and the passage of the Equal Rights Amendment (ERA). In the mid-1970s, Congress voted to fund a series of conferences that were held in every state, where women assembled and elected delegates to a National Women’s Conference that adopted a national plan of action to guide congressional and presidential policy on women.

However, the idea of political solidarity around women’s issues was challenged by conservative women who objected to the federal government’s work on advancing women’s rights and feminists as having the right to speak for all American women. Their response was the creation of the Pro-Family Movement, which held state conferences in direct opposition of the National Women’s Conference gatherings.

“Women and women’s issues have been extremely important in shaping our current political culture. And, they should be taken more seriously. The same issues that divided women in the 1970s have divided the nation ever since,” Spruill says.

While the women’s rights movement and the counter movement, led by anti-ERA leaders such as Phyllis Schlafly, resulted in more women on both sides involved in politics, it also created a political fracture that deepened and widened over time. A group of male conservative leaders called the New Right seized gender issues as a way to mobilize conservative voters. Ultimately, it shaped new platforms for both parties by the mid-1980s — a polarization that Spruill says has led to the contentious divide seen in the 2016 presidential election cycle.

“Moderation and compromise were devalued in American politics, and the nation became more polarized and deeply partisan as a result,” she says. “Scholars have tried to explain the origins of our current political culture. I think they have neglected the role that women and women’s issues played in the story.”

Spruill is passionate about helping students understand history, particularly women’s history. She challenges them to think about contemporary issues and consider the role they will play, not unlike her parents — a secretary and local grocer and mayor from Washington, N.C., challenged her and her sister to be engaged in the world.

“I’m grateful to the women who went ahead of me and broke down barriers, particularly to my mother and the women of the World War II generation who worked so hard so that women of my generation could go to college and realize opportunities,” Spruill said. “I’m really happy that things have improved so much that young women don’t feel as oppressed as we did. However, I do think they need to realize that we need to work together to make sure that we don’t lose some of the gains made.”

Spruill joined Carolina’s faculty in 2004, having taught at Vanderbilt University and the University of Southern Mississippi before that. In addition to her book, “New Women of the New South: The Leaders of the Woman Suffrage Movement in the Southern States,” she has edited numerous projects including the three-volume anthology “South Carolina Women: Their Lives and Times.”