Grow with the flow 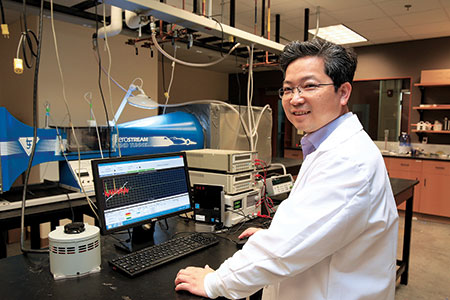 Chen Li joined the College of Engineering and Computing in 2009, founding the Micro/Nanoscale Transport Lab in the Horizon I Building. His team adjusts air velocity, humidity and other variables in a wind tunnel (shown in the background) to simulate different environmental conditions that affect heat transfer. "The final objective is to develop a new technology to replace the current water cooling technology for power plants," Li says. "We can save a huge amount of fresh water".

Lasers, rail guns and space stations have unique engineering needs that Carolina research is serving. Joining the faculty of the College of Engineering and Computing in 2009, Chen Li founded the Micro/Nanoscale Transport Lab, which is a world leader in cutting-edge heat transfer and energy production research.

Li, an associate professor of mechanical engineering, is working with his 15-member team to harness the properties of micro- and nanoscale structures to dramatically enhance heat transfer rates. Using an array of techniques, including microchannels, capillary evaporation, wicking, nanostructured interfaces and unique composite interfacing, Li has demonstrated heat flux of up to 1000 watts per square centimeter.

For context, he compares that to what is produced by a gas range. “That produces about 10 watts per square centimeter,” Li says. “So we are able to cool by more than 100 times what a gas burner produces.”

“These are very, very high heat fluxes,” says colleague and collaborator Jamil Khan, whose related research is featured here. “No one in the U.S., or even the world, has achieved that at the same mass flow rate.”

That kind of cooling power has a host of potential applications, particularly in the military, where lasers, rail guns and other next-generation weaponry have the capacity to produce tremendous amounts of heat that must be safely dissipated in the weapon system (if not in the target). Li’s lab currently has three projects with the U.S. Navy and receives other funding from the Department of Defense.

Li’s team is also is working on a unique system for NASA. Solar panels can reliably gather sunlight in the cloudless environment, at least for half of every orbital circuit, but they face capacity limits when it comes to peak demand in a large structure. Steam turbine technology would provide efficient energy production for high power consumption applications — except for one small problem.

“NASA would like to build a large-scale space station, which needs sufficient power. But they can’t build a power plant like one on Earth,” Li says, because generating power from steam, in every configuration produced so far, depends on gravity. Li’s team, however, recently demonstrated a system that has the ability to do it independent of gravity, opening a new frontier.