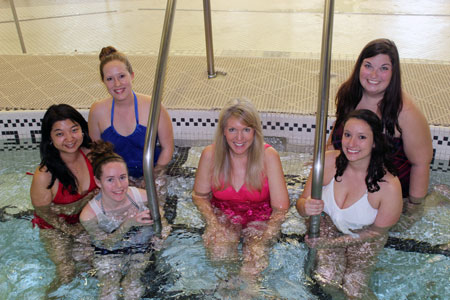 Along with the smell of sunscreen, the chlorine-heavy scent of a swimming pool is an indelible sensory cue that tells us summer has arrived. And while the smell may trigger fond memories of vacations past, it also may be a warning sign that the pool is filled with unhealthy levels of human bodily fluids, including sweat and urine.

In a new study published in the American Chemical Society’s “Environmental Science and Technology,” University of South Carolina chemistry professor Susan D. Richardson, together with EPA collaborators, details the potential health impacts that can result when pool and hot tub disinfectants combine with bodily fluids.

The study shows the chemicals that are used to kill bacteria, such as chlorine and bromine, react when mixed with bodily fluids, such as sweat and urine. The chemical byproducts that result can be harmful to a person’s health when inhaled, ingested or absorbed. Testing has shown these byproducts can cause genetic damage to cells in lab settings. Year-round exposure over many years to these byproducts also can lead to asthma and other respiratory conditions, a weakened immune system and even bladder cancer, Richardson said.

The long-term issues that may be caused by these byproducts would likely affect only people who are in pools or hot tubs for many hours every day – such as competitive swimmers and coaches, she said.

“We do plan to drill down further into our pool/spa data to look into other further correlations and possible impacts of these byproducts,” Richardson said.

Richardson and her team sampled water from public and private hot tubs and pools, checking the water both as it comes from the tap and once it is in the pool or hot tub after both normal and intense use. The team identified more than 100 disinfection byproducts in the water that can get into the bloodstream in various ways. That includes breathing that classic swimming pool smell — fumes produced from the chlorine treatments combined with sweat and urine. The byproducts also can be ingested by accidentally swallowing the pool water, or can be absorbed through the skin.

Pool users can lower their exposure by showering and using the bathroom before entering the pool area, and limiting the lotions and products used on the hair or skin, which can also combine with the treated water to form byproducts, she said.

Because regulations vary at the local and state levels, public pools and hot tubs have different chemical and maintenance standards, meaning some pools could potentially be more harmful than others. Public spas also tend to have more chemical byproducts due to the higher number of people using the spas.

Richardson says private hot tub owners can protect themselves from these harmful byproducts by implementing a silver filtration system, which eliminates the need for harmful treatments like chlorine and bromine. These systems kill pathogens, but do not produce fumes or byproducts in the process. These systems are available only for hot tubs, and more research is needed in order to develop a similar system on a larger scale for pools, she said.

Richardson said she began studying pool and hot tub water just before speaking at a water conference in Germany in 2003.

“I realized a very small part of the conference was about drinking water and that it focused heavily on pool water, so I wanted to do some research on my own pool, just out of curiosity,” Richardson said.

She said her interest grew as she tested more pools, then decided to further her research and study the impacts of byproducts in both pools and hot tubs. Richardson says more research needs to be done to look further into correlations and possible impacts of these byproducts.

"This is only the fourth on the mutagenicity of swimming-pools (and the first of U.S. pools) and the first study on the mutagenicity and identification of disinfection by-products in hot tubs,” Richardson said. “Thus, our results need to be confirmed by other studies. So, there is a lot more to do, including analyses of a variety of other pools and hot tubs and a more quantitative assessment of the impact of human usage on the potential health effects of pool and hot tub waters."

You can read professor Susan Richardson's study on the health impacts of pool water at the American Chemical Society’s website.