You never know what health problems you might encounter working at a clinic in a small village in the developing world. Yes, you might see patients with malaria or respiratory problems — but you might also have a patient walk in with a gash from a machete. Mark Humphrey saw just about everything working in Belize about a decade ago. 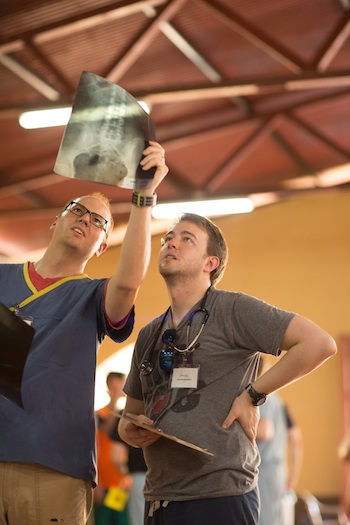 Mark Humphrey (left) has been at the university less than three years, but has already visited Nicaragua twice as part of the School of Medicine's global health initiatives.

“We as the physicians would take care of whatever health care needs that happened to be going on that day — whether it was a machete wound or a headache, backache, high blood pressure or whatever,” recalls Humphrey, assistant professor of clinical family and preventive medicine at the university’s Family Medical Center. “Sometimes that was the weapon of choice if they were getting into a bar brawl, or sometimes it was an accident that occurred when they were clearing a field.”

Working in the medical field overseas requires toughness of spirit and equanimity in the face of unfamiliar situations. It can also be highly rewarding — and offer insights back home, too.

Humphrey’s first exposure to working overseas came in high school when he visited Haiti. “My parents were missionaries in Sierra Leone, West Africa, prior to me being born,” he says. “So that was something that they had talked about. Then as a family we went to Haiti when I was in high school, to Port-au-Prince.”

The experience reinforced the positive feelings about medicine that Humphrey had already gained from his hometown doctor in rural Ohio, about an hour north of Columbus.

Humphrey went on not only to become a doctor practicing family medicine, but also to develop specialties in preventive medicine and public health. At each step of his career, he has sought opportunities to serve patients overseas. While working on his residency in the rural Glasgow Family Medicine program at the University of Louisville, he traveled to Belize. To help finance his master’s degree in public health from Johns Hopkins University, he joined the U.S. Navy and helped organize a humanitarian mission in the South Pacific. After his stint in the Navy, he looked for an academic position that would also have a global health component — which led him to the University of South Carolina and Jeff Hall.

“It’s all about the local partners — because honestly, you are borrowing their trust.”

Humphrey met Hall, director of the university’s global health fellowship program, at a global health conference; he became interested in Hall’s initiatives, including an annual trip to Nicaragua. Though he’s been at the university less than three years, Humphrey has already been to Nicaragua twice with Hall. He has learned a lot in his travels.

“It’s all about the local partners,” Humphrey says, “because honestly, you are borrowing their trust.” That trust works both ways: The hope is the work they do gives trust to people in the community to come to the clinic, but also vice versa — “by the fact that they are associated with outside American physicians, we are helping to build their reputation as well.”

Having worked in situations from rural Kentucky to urban Baltimore to villages in Central America, Humphrey has internalized the importance of understanding patients’ lives beyond just their medical problems.

“Culture eats strategy for lunch every day,” he says. “So if you don’t understand the way that people live — and that is true here in the United States as well — then we can have our grand ideas as doctors on how best to take care of a person, and it will fall flat on its face. So if you can gain that cultural context and make sure you are treating within that cultural context, you are more likely to have better outcomes for the patient and a better understanding of another culture.”