A young girl goes to the pediatrician with asthma symptoms. She gets the treatment she needs, but she is back in the doctor’s office two weeks later. The visits continue for months because toxic mold growing in her parents’ rental home won’t allow her to get better — until the pediatrician consults a lawyer who convinces the landlord to remove the mold. The girl’s asthma symptoms improve and the frequent trips to the doctor come to a stop. 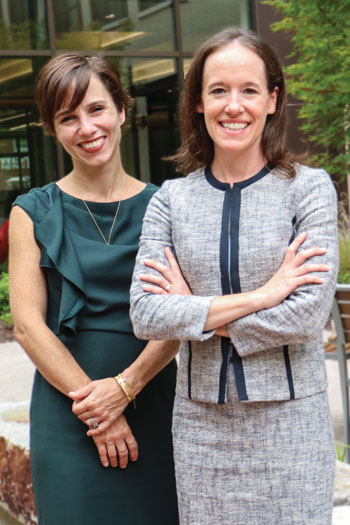 Emily Suski, left, and Lisa Martin will guide the School of Law's medicolegal clinic and domestic violence clinic, respectively. Each will give students experiential learning opportunities with important societal issues.

It might sound like fantasy, but that’s the kind of outcome administrators and faculty at USC’s law school are hoping for when they launch the new Carolina Health Advocacy Medicolegal PartnerShip (CHAMPS) Clinic this fall.

“We need to get at the social determinants of health — things like living conditions, transportation and income stability — because those have a big effect on a person’s health and well-being,” says Emily Suski, a newly appointed assistant professor of law and director of the CHAMPS Clinic.

“The main idea of this clinic is to train a new generation of doctors and lawyers to work together to improve health outcomes.”

Ten law students, four to six medical students, a master’s of social work student and several pediatric residents and physicians will work in teams on cases referred through pediatric clinics staffed by the Palmetto Health-USC Medical Group. Under Suski’s supervision, the student teams will discuss the pertinent medical issues of each case and determine what legal remedies might be available to address them.

In addition to the university’s law and medical schools, CHAMPS Clinic partners include Palmetto Health, the Palmetto Health-USC Medical Group and S.C. Legal Services. The clinic begins this fall and will be open regularly every spring semester thereafter.

“The students are going to be blown away,” says Caughman Taylor, professor and chair of the Department of Pediatrics in the School of Medicine, which provides medical care at two pediatric clinics at Palmetto Health Richland. “They’re going to see how this delivery model can improve health and what a huge benefit it will be to have healthier children who grow up to become healthier adults.”

Suski has taught similar clinics at other institutions. She says the students will first have to learn to meld their innate differences of perspective and professional lexicons, but once they begin to see results from their joint efforts, their enthusiasm will blossom.

The main idea of this clinic is to train a new generation of doctors and lawyers to work together to improve health outcomes.

Emily Suski, director of the School of Law's CHAMPS Clinic

To illustrate, Suski points to a case from a medicolegal clinic she taught in Atlanta. “We had a child who had a rare neurological disorder who ended up paralyzed; the parents split up because of the emotional strain; the mom lost her job because of missed time, then lost her car and apartment. And all of that impacted the child’s health,” she says. “We were able to help her find a job, which helped them regain housing and a car. We also got the child eligible for Supplemental Security Income. That was satisfying.”

Along with improving health outcomes and promoting interdisciplinary cooperation, the CHAMPS Clinic holds potential for health and educational research, and opportunities abound for collaboration with other campus partners. “I’m open to the idea of bringing in psychology and public health students. There’s rich potential here,” Suski says.

Taylor affirms that notion, pointing to the future. “We’re bringing together professions that haven’t always collaborated,” he says. “Just think what those individuals can do when, say, a doctor in a rural community teams up with a lawyer in the same community who agrees to take on a few pro bono cases every year. That could be huge. I can’t wait to kick this off.”

When Lisa Martin arrived at the School of Law this summer, she brought more than 10 years of experience in the law school clinical world and several years as an attorney advocating for teen victims of domestic volence.

The new director of the Domestic Violence Clinic has a two-part vision for the new clinic, which will be offered one semester per year.

“I see us involved in seeking emergency relief through domestic violence protection orders and addressing other issues that keep people in abusive relationships they otherwise would want to leave, such as financial security and immigration status,” Martin says. “I also see us engaged in broader initiatives, such as community education projects, so that people know what their legal rights are.”

But finding a legal remedy for domestic violence cases hinges, first, on determining that a crime has been committed.

“People experience different forms of abuse in different relationships — the menu of tactics can vary quite widely,” Martin says. “The law can step in and offer injunctive relief only if there’s been physical or sexual violence. It gets complicated when there is a lot of emotional abuse but no physical abuse. Clients might be terrified of that even more than physical violence.”

Martin’s interest in domestic violence issues began in law school when she worked in an international human rights clinic. After graduation, she worked for a large law firm and took on as much pro bono work as possible in areas of domestic and family violence. She later joined the staff of a nonprofit teen violence prevention organization before joining the law faculty at Catholic University in Washington, D.C.

“It’s satisfying to be able to teach about domestic violence, but even more so that I’m able to to make a difference by training law students who will later take on pro bono cases in this arena,” Martin says.

Eboni Nelson, a USC law school professor, serves as board president of SisterCare in Columbia, an organization that partners with women in abusive relationships. She hopes a collaboration will form with the new clinic when it launches in the spring semester.

“There is a dearth of advocates for this kind of work,” Nelson says. “The clinic will train future generations of those who will go into this full time and those who will do this as pro bono work.”