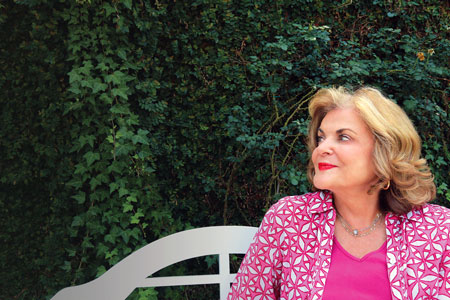 “I always loved sports, and it was just so easy to be a Carolina fan.” — Faye Jeffcoat, wife and mother of UofSC alumni and avid Gamecock fan

Faye Jeffcoat is a Gamecock by marriage and motherhood, but there is no doubt her blood runs garnet.

A native of Newberry, S.C., who was an English major at Newberry College, Jeffcoat says her family was evenly split between University of South Carolina and Clemson grads — that is until she met and married Abb Jeffcoat Jr., then a salesman for the Southern Bell Yellow Pages. After that, it was all Carolina, all the time.

“There’s just something about those Carolina fans,” she says.

The Jeffcoats attended Carolina games of all sorts, including baseball and men’s basketball, and Faye is a fixture at women’s basketball games these days. But the real draw was football.

“I always loved sports, and it was just so easy to be a Carolina fan,” she says.

When Abb III came along, there was little question where his loyalties would lie. “Little Abb” was born with cystic fibrosis, a lung disease that would require years of treatments and eventually a lung transplant. He went to Carolina, in part to stay close to home, but also because “he absolutely loved the Gamecocks — they both did.”

Big Abb went on to become a Realtor and was a partner in one of the city of Columbia’s largest real estate agencies, Russell & Jeffcoat. His son would later join the firm after graduating from Carolina.

The two enjoyed many of the same activities, Faye Jeffcoat says, including hunting — Big Abb for birds, Little Abb for deer. But Gamecock athletics was their shared passion.

Little Abb died in 2007 at the age of 37 from complications from a lifetime battle with CF. “He was an amazing young man,” his mother says. “He learned to be aggressive and ask for help when he needed it. He was focused.”

In honor of her son and husband, Faye Jeffcoat made a gift to the athletics department to name one of the entrance gates on the Springs Brooks Plaza leading into the Zone.

“It’s so fitting that it will be seen every game by the folks we went to the games with for so many years,” she says.