Living and working in "famously hot" Columbia, University of South Carolina faculty get familiar with high temperatures pretty quickly. For some, however, the job really heats up when their research takes them overseas. As the mercury continues to rise in the Palmetto State, here's some perspective on perspiration. 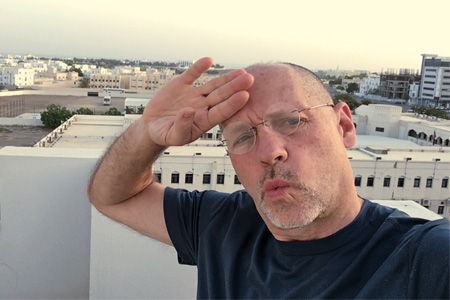 Van Kornegay, associate professor of visual communications, traveled to Oman in May with Jody Pritt, director of International Student Affairs, as part of the Media and the Mideast study abroad program.

If you think South Carolina is hot in the summer, try Oman. Van Kornegay was there in May co-leading the Media and the Mideast study abroad program along with Jody Pritt, director of International Student Affairs.

Thirteen students, many of them journalism majors, traveled with Pritt and Kornegay, an associate professor of visual communications. Their schedule featured trips to various media outlets, where the students interviewed alumni who work there — “Omanis who came to USC and returned back to Oman,” Kornegay explained via email.

Temperatures were running between 104 and 109 degrees that week, and Kornegay was doing his best to cope. “Everything is done inside where there’s air conditioning,” he says. “When you’re outside, you dash between spots of shade, treating them like stepping stones in a boiling hot spring.”

Kornegay has worked in some hot places before — Africa, French Polynesia — but Oman is on a whole different level, he said.

“In those places, the heat was merely uncomfortable,” he says. “Here, with temperatures around 110, it’s just unworkable to be outside. The sun is extreme from above and the radiant heat from the pavement then hits you from below. I went for a walk this morning at 6 a.m. — and it’s hard to believe, but 98 degrees seemed cool.”

When reached in late May via Skype, archaeologist Jennifer Pournelle was in Basra, Iraq, enjoying a temporary respite from the heat. The temperature had only reached 103 degrees.

“It’s really pleasant,” Pournelle says, adding that it was a dry heat and there had also been a breeze. The day before, the temperature had hit 113 degrees. By July, she expects it will hit 125.

Pournelle knows a few things about heat. She’s been going to Iraq for years, conducting extensive research on the origins of ancient Mesopotamian cities. Her findings have shown the importance of lowland marshes in building and sustaining those cities. “After 10 years, I became convinced that the ecology of cities is embedded in the ecology of wetlands,” she says.

“Here, there is no margin for error.”

Now, she focuses on the living. In Basra, she’s working on environmental approaches to wastewater —and, more specifically, on constructed wetlands as a means of making that city more sustainable. There used to be lots of marshes in the area, but they were drained during the regime of Saddam Hussein.

The benefits to introducing constructed wetlands are innumerable, Pournelle says, and relate directly to heat. For one-tenth the cost of a wastewater treatment plant, reed beds (which use microorganisms to treat sewage) can help produce cleaner water than what currently comes out of the tap. They can provide fodder for livestock and habitat for fish nurseries, and can produce changes in the microclimate, making it cooler within a limited area.

There’s also the purely aesthetic benefit. “Anything green really jumps out and is beautiful,” Pournelle says. “People really pine for it.”

But Pournelle takes the risks seriously when working in the heat and has neither time nor patience for those who would bring a “macho attitude.” It’s important to get out in the field at the first sight of daylight and to finish before noon, she says. Researchers deep-freeze water so that the frozen blocks can be used to cool someone down quickly and so that drinking water will be colder than room temperature.

It’s not always easy to do field-based research overseas. Sometimes, it’s not advisable either, or even possible. 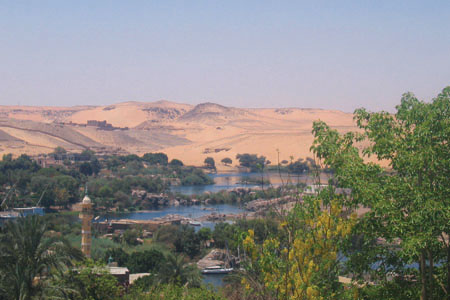 Jessica Barnes, an assistant professor of geography, conducted research on the Nile River in Egypt, seen here near the Aswan Dam.

Jessica Barnes, an assistant professor of geography who earned her Ph.D. in sustainable development from Columbia University in 2010, had originally wanted to do her doctoral research in Syria. But the politics of that country — even before the civil war started in 2011, there was significant tension with the U.S. government — nixed her efforts.

“I was interested in the tributaries of the Euphrates and wanted to look at that impact,” she says. “But I had to shift my research because of the political difficulties.”

Instead, Barnes went to Egypt, where she studied the politics of water use along the Nile. She spent a year living in a rural village in 2007 and 2008, with occasional travel to Cairo and elsewhere. The result of her work was the 2014 book “Cultivating the Nile: The Everyday Politics of Water in Egypt,” which addresses the question of who gets water and why. More recently, she has co-edited a collection of essays, “Climate Cultures: Anthropological Perspectives on Climate Change” (2015).

Climate change is “mostly looked at from the natural sciences, and to the extent that there is social science research, it tends to be economics or political science,” Barnes says. Her collection aims to make a place at the table for anthropologists and others looking at “how local populations understand and experience climate change” in different geographic and social contexts.

On the ground in Egypt, Barnes hasn’t heard a lot of farmers talking about climate change. While there is awareness among scientists and some policymakers of rising temperatures, she says, the major concern for farmers on the ground is not about heat directly but about access to water.

“Water supply is related to climate, but indirectly so,” Barnes says. “There are all these dams and control structures that affect how much water farmers are getting — they don’t link it to climate as much as to political interventions.”

Barnes is no stranger to working in hot climates. She’s spent significant time in the West Bank, Syria and Lebanon. And she points out that when you are in rural Egypt, “nothing is air conditioned.”

Nonetheless, she says: “At least it’s a dry heat. You get used to it.”

This story was originally published in the June/July issue of USC Times.