Erin Coats is the picture of concentration as she slides to the foul line and sends a bowling ball careening down the lane. A moment later 10 pins clatter, then bang hard to the wooden floor — a strike!

Barry Coats has watched his daughter bowl for years, and it never, ever gets old. He is devoted fan, fierce advocate and doting father. If parental pride were a commodity, Barry would be a millionaire. 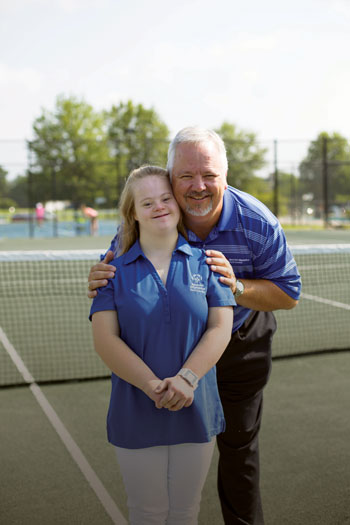 “I know the pain that parents of special needs children feel when someone cuts a dirty look if your child is having a meltdown — or when an adult who should know better uses the R word in your presence.” — Barry Coats, CEO and president, Special Olympics South Carolina

Flash back to 1986, more than a decade before Erin was born. Coats was a student at USC, majoring in organizational management after flirting with accounting. He had played football and baseball at Andrew Jackson High School in Kershaw, S.C., and walked on as a catcher at USC, though that sojourn in collegiate sports was brief. He was an athlete at heart but didn’t know exactly what he wanted to do in life. Then a different kind of sport came along.

“I grew up on a small farm, and all my summer jobs involved manual labor, working in hay fields — hot work,” he says. “The summer before I graduated Carolina, a part-time bookkeeping job at the Special Olympics South Carolina office opened up. The lady who had it wanted to be a lifeguard at Myrtle Beach.”

Coats immediately liked two things about his new summer job — there was no hay pitching in 95-degree heat and the Special Olympics athletes were fun to hang out with. There were perhaps 2,000 back then (there are nearly 25,000 Special Olympics athletes in S.C. now), mostly kids competing in games throughout the year and across the state. He was drawn to their enthusiasm and pure love of sport, and the new director of the organization, liking what he saw in Coats’ attitude, wanted to hire him full time.

“But I was going to make my millions,” Coats says with a chuckle, so he turned down the offer. He graduated from Carolina in 1987 and found another job working for an electrical supply house, but there was no gold at the end of that rainbow — and Special Olympics beckoned. He eventually accepted the job as a full-time accountant, and not long after was named vice president for internal operations.

From spectator to participant

A decade later and a year before he was named the new CEO and president, Coats’ world changed forever. His perspective on life and especially on his work would be inexorably altered. Erin, his oldest daughter, was born with Down Syndrome.

“Everyone wants that perfect child who’s going to be the smartest, the most athletic — and then you realize it’s not going to happen. But after a day or so of feeling ‘woe is me,’ it was OK. In fact it was awesome. She was perfect. We had a great support system and were just excited that Erin was here,” he says.

“It made it more personal to me. I can offer counsel that I couldn’t have before Erin was born,” he says. “I know the pain that parents of special needs children feel when someone cuts a dirty look if your child is having a meltdown — or when an adult who should know better uses the R word in your presence.”

At Lexington High School where Erin is now a 16-year-old junior, the top boy’s tennis player in the school practices on the court every week with Erin and other athletes with intellectual disabilities. A varsity cheerleader is one of Erin’s best friends, hanging out with her at lunch or after school. One of Special Olympics’ new initiatives is Project Unify®, an education and sports-based strategy that offers youth with and without intellectual disabilities the opportunity to train, play and hang out together.

You might think such relationships would be artificial or forced, lasting only until the ringing of the last bell. Kelsey Foster would beg to differ. She was a student at Lexington High School when Project Unify began several years ago and helped set up a club there.

“I started working with special needs students in high school because they were so overlooked; no one acknowledged them,” says Foster. “We have a lot of Project Unify clubs® in schools in South Carolina now, and it’s so powerful. All it takes is one interaction and you’re hooked. I still look up a couple of my pals at Lexington High whenever I’m back from college.”

Justin Workman helped connect Foster with Special Olympics to launch Project Unify at Lexington High School. A 2016 Carolina graduate, Workman has coached special needs athletes for several years and describes big pep rallies for classmates with intellectual disabilities who are on their way to compete in Special Olympics games. “Just like you would cheer on the football team leaving for a big game,” says Workman, who hopes to attend law school and become a lawyer for individuals with special needs.

Project Unify clubs have been especially successful in signing up kids for P.E. classes with their differently abled peers. “It’s not just playing together for an hour-long class,” Coats says. “They tailgate at football games and do the Polar Plunge together; they go to the prom together. These kids want to make a difference, and they’re light years ahead of where I was at their age in terms of maturity.”

Anna Neal Hunt is on the tennis court, and you’d think she was Steffi Graf from the sound of spectators shouting out her name. Anna is shy and would rather just keep to herself, but she can’t resist the attention her friends are lavishing on her.

Which makes her mother’s heart glow. Michelle Hunt is proud of her 13-year-old daughter who is on the autism spectrum. And she’s glad for the outlet that Special Olympics events provide.

“There’s the competition — Anna has competed at the local and national level, in horseback riding, bowling and tennis,” she says. “Other families talk about their children’s soccer games or whatever sport, so it makes us feel normal.”

There’s a pure joy that you see at Special Olympics games, different than what you see in professional, collegiate or even high school sports. Their friendship is genuine and their excitement is true.

But what Special Olympics delivers goes beyond mere sports and cheering and medals, Hunt says. “Any-one on the autism spectrum likes to take themselves out of the situation and out of the moment,” Hunt says. “But Special Olympics draws them out. It has done so much for Anna socially — friends are screaming out her name at events and forcing her to talk to them. There are so many facets of development taking place.”

Angela Truesdale agrees. “It’s more than just medals and games — we’ve made lifelong friends,” says Truesdale, mother of 18-year-old fraternal twins Landon, who has Down syndrome, and Ashton. Her family has been involved with Special Olympics since they met Barry Coats years ago.

“My son and daughter have made friends for life. Ashton considers her brother’s friends her friends;

they all went to the prom together,” says Truesdale, a special education teacher who earned a master’s degree in education from Carolina. “Professionally, personally, I can’t say enough about Special Olympics — it’s opened so many doors.”

What Truesdale most appreciates about Special Olympics is the sense of community it builds. Coats has helped weave a spirit of camaraderie into the fabric of Special Olympics events and practices, which take place throughout the year. Families have a place to relax, while giving their children opportunities to take part in activities that build confidence.

“A parent once said to me, ‘I know when we come to a Special Olympics event we won’t be asked to leave,’” Coats says. “That broke my heart because you know that means she and her family have been asked to leave in the past — maybe in a restaurant or a movie theater or even church because their child with autism was acting out.”

In fact, most families with special needs children have a difficult time making church attendance work, says Hunt. “Being a Christian, that’s huge to me. And you think about all of the other places where people with special-needs children can’t be accommodated,” she says. “But at Special Olympics, everyone is cheering for everyone else." 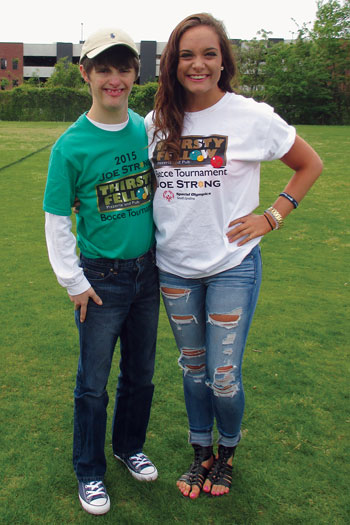 Fraternal twins Landon, left, and Ashton Huckabee. Landon has Down syndrome and participates in the Special Olympics.

As the Special Olympics S.C. population has grown over the years, Coats has scrambled to find ways to support more activities and hire more staff — both of which require more funding.

But fundraising for Special Olympics isn’t like raising money for a children’s hospital. There’s no urgency; no one is dying. “Our parents would say that Special Olympics might not be saving their children's lives, but it is changing them — it’s widening the scope of their friendships and enriching their lives. Social inclusion is a large part of what we do,” Coats says.

Fortunately, law enforcement officers across the state are among the organization’s most stalwart supporters. Mike Still retired earlier this year from a 25-year career with the transport police and has been involved with Special Olympics fundraisers for the past 11 years. He’s the volunteer director for the Law Enforcement Torch Run®, which last year raised more than $780,000 for Special Olympics S.C.

“It made me love the organization that much more when I realized that Barry was involved with Special Olympics long before his oldest daughter was born,” he says. “I’ve arrested drunk drivers and bank robbers, but supporting Special Olympics is the most important thing I’ve done in my career.”

Marcus Rhodes, a detective with the Horry County Sheriff’s Department, has been volunteering with Special Olympics S.C. and Law Enforcement Torch Run since 1983.

“Once I met other officers and then met some of the athletes, I was hooked,” he says. “There’s a pure joy that you see at Special Olympics games, different than what you see in professional, collegiate or even high school sports. Their friendship is genuine and their excitement is true. There’s no guile or pretense.”

Rhodes has witnessed law enforcement support for Special Olympics around the world. It’s a natural tie-in, he says, given their mission to protect and serve. “We want to stand in the gap between someone in need and someone who wants to take advantage. For Special Olympics athletes, that means giving them a leg up, providing funding, providing awareness.”

Coats has an even simpler explanation for law enforcement’s affinity for Special Olympics: “In their day job, they see the worst in people. Think of a guy having to go on a drug bust or settle a domestic dispute. They they come over to our side and get hugs and high fives all day.”

Hope for the future

Coats thinks back to his own school days when students with special needs were kept behind closed doors. “I’ve seen the acceptance of our population grow over the years,” he says. “Attitudes have shifted, but it’s still a civil rights movement in terms of real acceptance and inclusion.”

Special Olympics has played a role in breaking down barriers and changing attitudes, Coats says. But what really gives him hope are that today’s students will be tomorrow’s leaders.

“We’ll reach 100,000 kids in S.C. with and without special needs this year through Project Unify, and some of those kids will become doctors and lawyers,” Coats says. “Their exposure to individuals with special needs will be priceless. The No. 1 wish of our kids is to have a job, a family, to be a part of society. Their Project Unify partners will want to help them — and that gives me a lot of hope for the future.”